The Boys' Life of Abraham Lincoln 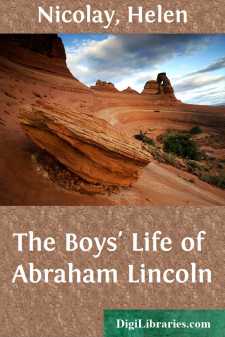 Add to My Favorites
Published: 9 years ago
Downloads: 111
Rating: (0 Votes)

I. A PRESIDENT'S CHILDHOOD

Abraham Lincoln's forefathers were pioneers—men who left their homes to open up the wilderness and make the way plain for others to follow them. For one hundred and seventy years, ever since the first American Lincoln came from England to Massachusetts in 1638, they had been moving slowly westward as new settlements were made in the forest. They faced solitude, privation, and all the dangers and hardships that beset men who take up their homes where only beasts and wild men have had homes before; but they continued to press steadily forward, though they lost fortune and sometimes even life itself, in their westward progress. Back in Pennsylvania and New Jersey some of the Lincolns had been men of wealth and influence. In Kentucky, where the future President was born on February 12, 1809, his parents lived in deep poverty Their home was a small log cabin of the rudest kind, and nothing seemed more unlikely than that their child, coming into the world in such humble surroundings, was destined to be the greatest man of his time. True to his race, he also was to be a pioneer—not indeed, like his ancestors, a leader into new woods and unexplored fields, but a pioneer of a nobler and grander sort, directing the thoughts of men ever toward the right, and leading the American people, through difficulties and dangers and a mighty war, to peace and freedom.

The story of this wonderful man begins and ends with a tragedy, for his grandfather, also named Abraham, was killed by a shot from an Indian's rifle while peaceably at work with his three sons on the edge of their frontier clearing. Eighty-one years later the President himself met death by an assassin's bullet. The murderer of one was a savage of the forest; the murderer of the other that far more cruel thing, a savage of civilization.

When the Indian's shot laid the pioneer farmer low, his second son, Josiah, ran to a neighboring fort for help, and Mordecai, the eldest, hurried to the cabin for his rifle. Thomas, a child of six years, was left alone beside the dead body of his father; and as Mordecai snatched the gun from its resting-place over the door of the cabin, he saw, to his horror, an Indian in his war-paint, just stooping to seize the child. Taking quick aim at a medal on the breast of the savage, he fired, and the Indian fell dead. The little boy, thus released, ran to the house, where Mordecai, firing through the loopholes, kept the Indians at bay until help arrived from the fort.

It was this child Thomas who grew up to be the father of President Abraham Lincoln. After the murder of his father the fortunes of the little family grew rapidly worse, and doubtless because of poverty, as well as by reason of the marriage of his older brothers and sisters, their home was broken up, and Thomas found himself, long before he was grown, a wandering laboring boy. He lived for a time with an uncle as his hired servant, and later he learned the trade of carpenter. He grew to manhood entirely without education, and when he was twenty-eight years old could neither read nor write....