The Boy who sailed with Blake 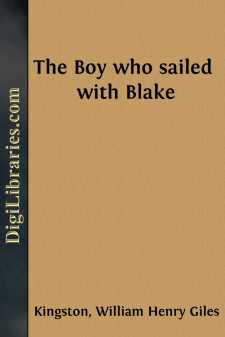 My Friends and I.

“Hark! the bells of Saint Michael’s are sending forth a jovial peal!” exclaimed Lancelot Kerridge, as he, Dick Harvey, and I were one day on board his boat fishing for mackerel, about two miles off the sea-port town of Lyme. “What they are saying I should mightily like to know, for depend on’t it’s something of importance. Haul in the lines, Ben!” he continued, addressing me; “and, Dick, put an oar out to windward. I’ll take the helm. We shall fetch the Cob by keeping our luff.”

The wind was off shore, but as we were to the westward of the Cob, and the tide was making in the same direction, we could easily fetch it. The water was smooth, the sea blue and bright as the eyes of sweet Cicely Kerridge, my friend Lancelot’s young sister, while scarcely a cloud dimmed the clear sky overhead.

Lyme, then containing but one thousand inhabitants, where my two companions and I lived, is situated in Dorsetshire, near its western border, on the northern shore of a wide bay, formed by the Bill of Portland on the east and the Start Point on the west. Along the coast are several other towns, of which Dartmouth, owing to its excellent harbour, is the most considerable, besides numerous villages, including Charmouth and Uplyme. A line of cliffs of no great height extends away on either side of Lyme, which stands at the bottom of a valley; while beyond it rise the green slopes of Colway and Uplyme, hills overlooking the town.

On the eastern side was the house of my father, Captain Roger Bracewell. He had commanded several of the trading ships of Master Humphrey Blake, of Bridgwater, at one time a merchant of renown, and the father of Captain Robert Blake, who had already made his name famous for his gallant defence of Prior’s Hill when Bristol was besieged by Prince Rupert, until it was yielded in a dastardly fashion by Governor Fiennes. My father retiring from the sea with a competency, having married late in life, settled in Lyme, his native place. His house, which overlooked the bay, was of the better sort, with curious gables, and a balcony supported on strong wooden pillars in front, where he was wont to sit, smoking his pipe, and enjoying a view of the ocean he still loved full well, with the ships—their white canvas spread to the breeze—sailing by in the distance, or approaching to take shelter in our roadstead.

There were a few other residences of the same character; but most of the houses were built of soft stone, with thatched roofs, forming four irregular narrow streets, with several narrower lanes of no very dignified character. Still, we were fond of our little town, and had reasons to be proud of it from the events I am about to describe.

My two friends and I spent much of our time on the water. Lancelot, my senior by two years, was the son of the worshipful Master Kerridge, Mayor of Lyme, and Dick’s father was Mr Harvey, a man of considerable wealth and influence in the neighbourhood, brother-in-law of Mr Ceely, who had been made Governor of the town by the Parliament....