The Boy Settlers A Story of Early Times in Kansas 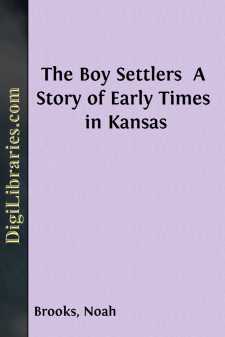 CHAPTER I The Settlers, and Whence They Came.

There were five of them, all told; three boys and two men. I have mentioned the boys first because there were more of them, and we shall hear most from them before we have got through with this truthful tale. They lived in the town of Dixon, on the Rock River, in Lee County, Illinois. Look on the map, and you will find this place at a point where the Illinois Central Railroad crosses the Rock; for this is a real town with real people. Nearly sixty years ago, when there were Indians all over that region of the country, and the red men were numerous where the flourishing States of Illinois, Iowa, and Wisconsin are now, John Dixon kept a little ferry at the point of which I am now speaking, and it was known as Dixon’s Ferry. Even when he was not an old man, Dixon was noted for his long and flowing white hair, and the Indians called him Na-chu-sa, “the White-haired.” In 1832 the Sac tribe of Indians, with their chief Black Hawk, rose in rebellion against the Government, and then there happened what is now called the Black Hawk war.

In that war many men who afterwards became famous in the history of the United States were engaged in behalf of the government. One of these was Zachary Taylor, afterwards better known as “Rough and Ready,” who fought bravely in the Mexican war and subsequently became President of the United States. Another was Robert Anderson, who, at the beginning of the war of the Rebellion, in 1861, commanded the Union forces in Fort Sumter when it was first fired upon. Another was Jefferson Davis, who, in the course of human events, became President of the Southern Confederacy. A fourth man, destined to be more famous than any of the others, was Abraham Lincoln. The first three of these were officers in the army of the United States. Lincoln was at first a private soldier, but was afterwards elected captain of his company, with whom he had come to the rescue of the white settlers from the lower part of the State.

The war did not last long, and there was not much glory gained by anybody in it. Black Hawk was beaten, and that country had peace ever after. For many years, and even unto this day, I make no doubt, the early settlers of the Rock River country loved to tell stories of the Black Hawk war, of their own sufferings, exploits, hardships, and adventures. Father Dixon, as he was called, did not choose to talk much about himself, for he was a modest old gentleman, and was not given, as they used to say, to “blowing his own horn,” but his memory was a treasure-house of delightful anecdotes and reminiscences of those old times; and young and old would sit around the comfortable stove of a country store, during a dull winter evening, drinking in tales of Indian warfare and of the “old settlers” that had been handed down from generation to generation.

It is easy to see how boys brought up in an atmosphere like this, rich in traditions of the long-past in which the early settlement of the country figured, should become imbued with the same spirit of adventure that had brought their fathers from the older States to this new region of the West....