The Boy Scouts on the Yukon 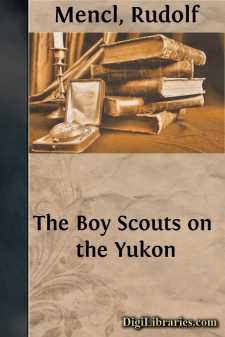 CHAPTER I. THE “INSIDE PASSAGE.”

“Ar-r-rouse ye—r-r-rouse ye, me merry, merry men,” boomed the voice of Gerald Moore, with a slightly Celtic roll of the “r’s,” as he drummed impatiently on the shutter of the cabin window, while his companion, Jack Blake, performed a similar tattoo on the adjoining window. “Faith, and it was daylight hours ago, and ye don’t know what ye’re missing.”

The shutter slid back, and the pleasant, if rather drowsy face of Randolph Peyton peered forth, and behind his shoulder that of Donald Graeme.

“Daylight, did ye say?” remarked the latter. “It’s my opinion it’s been daylight all night, for it surely wasn’t dark when we retired, and we’ve only been in bed a few minutes.”

The scene was the outside cabin deck of the well-appointed steamer “Queen” of the Alaska Steamship Company, which was plowing her way through the quiet waters of the “Inside Passage,” on her way to the land of the Yukon and the Klondike.

The hour was only four in the morning, but the sun was high, and the day in those high latitudes was well begun.

“No regrets, Don, you sleepyhead,” said Gerald. “You’ve already had seven hours’ sleep, and on this trip one ought not to go to bed at all.”

By this time, Jack had succeeded in arousing his brother, Pepper Blake, and the latter’s bunk mate, Dick Wilson, who gazed out a little resentfully, as they threw back the sash, but whose faces quickly brightened at the scene that met their eyes.

“Yes,” said Jack, “there’s mighty little darkness up here at this time of year, and I suppose Don thinks it’s an awful waste of good daylight turning it on while we sleep.”

“Ye’ll see more than this ‘wasted’ when ye get further north, and I suppose Don will sit up all night to save it,” replied Gerald.

This reference to be cautious and prudent, not to say economical, nature of the canny Scot, raised a laugh, and the four who had been routed out of their bunks, through the energy of Jack, who, brought up in a newspaper office and atmosphere, hated to let anything unusual get away from him, hastily dressed and joined their two chums on the deck.

“I couldn’t miss a yard of this scenery,” said Jack, “and we’ve a few things in that line, along our native Hudson, to brag about, too.”

The steamer was treading her way through straits and channels among hundreds of islands that fenced these almost lake-like waters from the long swells of the North Pacific. Although it was the latter part of April, early in the year for these latitudes, the influence of the warm waters of the Japanese Gulf Stream could be seen in the bright green of the islands.

On the other side of the ship, the dark green forests that clothed the mountains of British Columbia came down to the very water’s edge, and swept by in one majestic panorama.

“There’s certainly lots of scenery to the mile,” said Rand, drawing a long breath, as he gazed in admiration.

“My grandfather said that is what makes Scotland such a great country,” remarked Don, catching at Rand’s half-humorous comment, “standing the land up on end.”

“Let’s give it the Scout’s salute,” suggested Pepper, with enthusiasm as the laugh over Don’s serious remark died away....