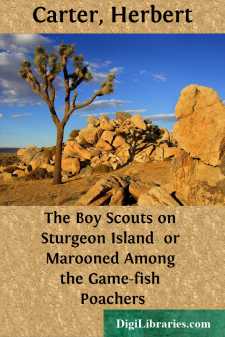 CHAPTER I OUT FOR A ROYAL GOOD TIME

"Sure I will, Giraffe; what is it you want now?"

"Then tell me who that is talking to our scoutmaster, Dr. Philander Hobbs; because, you know, I've just come in after a scout ahead, and first thing saw was a stranger among the patrol boys."

"Oh! You mean that thin chap who came along in his buggy a bit ago, chasing after us all the way from that town where we had a bite of lunch? Why, I understand he's the son of the telegraph operator there. You know we made arrangements with him to try and get a message to us, if one came along."

"Whew! then I hope he ain't fetched a message that'll spoil all our fun, just when we've got to the last leg of the journey, with the boat only a few miles further on! That'd be the limit Bumpus. You don't know anything about it, I reckon?"

"Well, our scout-master looks kinder down in the mouth, and I'm afraid it must be some sort of a recall to duty for him," remarked a third lad, also wearing the khaki garments of a Boy Scout, as he joined the pair who were talking.

"I'm afraid you're right, Davy," said the tall, angular fellow who seemed to own the queer name of Giraffe, though his long neck plainly proved why it had been given to him by his mates. "But don't it beat the Dutch how many times Doe Hobbs has had to give up a jolly trip, and hurry back home, just when the fun was going to begin, because the old doctor he works with needed him the worst kind?"

"But say," spoke up the fat boy who answered to the designation of Bumpus, "mebbe the Cranford Troop, and the Silver Fox Patrol in particular, ain't lucky to have such a wide-awake, efficient assistant scout-master as our Thad Brewster, who knows more in a day about out-of- door things than Dr. Hobbs would in a year."

"Yes, that's right," replied Giraffe; "but we're going to know what's in the wind now, because here's the scout-master heading this way, with several of the other boys tagging at his heels, and sure as you live they're grinning too. Looks to me like Stephen and Allan thought it a good joke, though they look solemn enough when Doc turns their way. He's just got to leave us, you mark my words, fellows."

It turned out that very way. An urgent message had come that necessitated the immediate return of the scout-master. The old doctor with whom he practiced had been unlucky enough to fall, and break a leg; so it was absolutely essential that his assistant come back to look after the sick people of Cranford, hundreds of miles away.

While the scout-master is getting his personal belongings together, and the six boys gathered around are trying to look terribly disappointed, it might be well to introduce the little party to such of our readers who have not had the pleasure of making their acquaintance in previous volumes of this series.

The Cranford Troop of Boy Scouts now consisted of two full patrols, and a third was in process of forming. The original patrol was known as the Silver Fox, and the six scouts who were with Doctor Hobbs, away up here on the border of Lake Superior, bent on a cruise on the great fresh water sea, all belonged to that division of the troop, so that they are old friends to those who have perused any of the earlier books....