The Boy Scouts on Belgian Battlefields 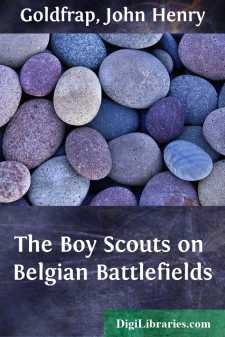 CHAPTER I. ANTWERP, ON THE SCHELDT.

"Oh! how glad I am that part of the trip is over, now we've crossed from England to Antwerp without being wrecked!"

"You certainly did seem to have a bad time of it, Tubby, in the wash of the Channel!"

"Bad time did you say, Rob? It was a great deal worse than anything we struck on the voyage between New York and Liverpool, let me tell you."

"But now we want to forget all our troubles of the past, Tubby."

"I know what you mean by that, Merritt; it's just the same as telling me the worst is yet to come."

"Well, I'm a little afraid myself that's going to turn out a fact. Here we are, just landed in a strange country that is being overrun by an army of German invaders; and all of us are bound to push deeper and deeper into the mire."

"Hey, Merritt, you give me a shiver when you say that, don't you know?"

"I guess you must mean a quiver, Tubby; because whenever you laugh or tremble you make me think of a bowl full of jelly!"

"Now you're making sport of me because I'm so pudgy and fat. Just as if I could help that; can I, Rob?"

"To be sure you couldn't, Tubby; and we wouldn't want you to be anything but what you are—the best natured scout in the whole Eagle Patrol, and I'm safe in saying you're the only fellow in the Long Island town of Hampton who hasn't an enemy. Everybody takes a fancy to a jolly rolypoly like you, Tubby."

"What would we do without you?" Merritt added, with real feeling in his voice.

"Well, but it strikes me you tried mighty hard to induce me not to join you two on this wonderful trip abroad," complained the fat boy reproachfully.

"There was a good reason for that, Tubby," defended Merritt quickly. "I could see that with all these Old World countries in a scrap, my job of finding that man who is wanted so badly by my grandfather might take me into the fighting zone. Now Rob, as the leader of the Eagle Patrol, volunteered to stand by me, and I gladly accepted his assistance. When you asked to go along I was afraid the hardships of the trip might be too much for one of your peculiar build. That's all, I give you my word for it, Tubby."

"My 'peculiar build,' as you call it, Merritt," chuckled the other, considerably mollified by the explanation offered, "has gotten me into a peck of trouble, I admit. But you never saw me show the white feather, did you?"

"Never, Tubby!" admitted the boy addressed, who was a rather thoughtful looking young chap, of athletic build, though possibly not quite the equal of Rob Blake, the leader of the scout patrol to which all of them belonged. "It was mighty good of you two to back me up when I'd decided to take the risk alone. But unless that precious paper can be recovered, my grandfather, you know, stands to lose what he says is an enormous amount of money."

"He's got plenty in reserve, I understand, Merritt," observed Blake. "What a grand thing that turned out for your folks when Grandfather Merritt, who had cut your dad out of his will many years ago after he married against his wishes, repented of his cruelty, and paid you an unexpected visit to get acquainted. Little did you think, when you stood up for that old fellow who was being snowballed so unmercifully by a bunch of village boys, that it was your own grandfather."

"Yes," added Tubby, "you know they say a good action is never thrown away. That's why I'm always watching for my opportunities. Some day I hope to win the admiration of a crank millionaire who should, of course, make me his heir."

"Well, here we are landed in Antwerp, and with a lot of sights to gather in before we set out in the direction of Brussels to find your man....