The Boy Scouts of the Eagle Patrol 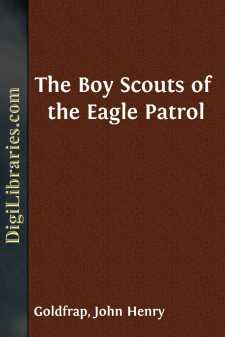 CHAPTER I SCOUTS ON THE TRAIL

The dark growth of scrub oak and pine parted suddenly and the lithe figure of a boy of about seventeen emerged suddenly into the little clearing. The lad who had so abruptly materialized from the close-growing vegetation peculiar to the region about the little town of Hampton, on the south shore of Long Island, wore a well-fitting uniform of brown khaki, canvas leggings of the same hue and a soft hat of the campaign variety, turned up at one side. To the front of his headpiece was fastened a metal badge, resembling the three-pointed arrow head utilized on old maps to indicate the north. On a metal scroll beneath it were embossed the words: "Be Prepared."

The manner of the badge's attachment would have indicated at once, to any one familiar with the organization, that the lad wearing it was the patrol leader of the local band of Boy Scouts.

Gazing keenly about him on all sides of the little clearing in the midst of which he stood, the boy's eyes lighted with a gleam of satisfaction on a largish rock. He lifted this up, adjusted it to his satisfaction and then picked up a smaller stone. This he placed on the top of the first and then listened intently. After a moment of this he then placed beneath the large underlying rock and at its left side a small stone.

Suddenly he started and gazed back. From the distance, borne faintly to his ears, came far off boyish shouts and cries.

They rose like the baying of a pack in full cry. Now high, now low on the hush of the midsummer afternoon.

"They picked the trail all right," he remarked to himself, with a smile, "maybe I'd better leave another sign."

Stooping he snapped off a small low-growing branch and broke it near the end so that its top hung limply down.

"Two signs now that this is the trail," he resumed as he stuck it in the ground beside the stone sign. "Now I'd better be off, for they are picking my tracks up, fast."

He darted off into the undergrowth on the opposite side of the clearing, vanishing as suddenly and noiselessly as he had appeared.

A few seconds later the deserted clearing was invaded by a scouting party of ten lads ranging in years from twelve to sixteen. They were all attired in similar uniforms to the leader, whom they were tracing, with but one exception they wore their "Be Prepared" badges on the left arm above the elbow. Some of them were only entitled to affix the motto part of the badge the scroll inscribed with the motto. These latter were the second-class scouts of the Eagle Patrol. The exception to the badge-bearers was a tall, well-knit lad with a sunny face and wavy, brown hair. His badge was worn on the left arm, as were the others, but it had a strip of white braid sewn beneath it. This indicated that the bearer was the corporal of the patrol.

As the group of flushed, panting lads emerged into the sandy space the corporal looked sharply about him. Almost at once his eye encountered the "spoor" left by the preceding lad.

"Here's the trail, boys," he shouted, "and to judge by the fresh look of the break in this branch it can't have been placed here very long....