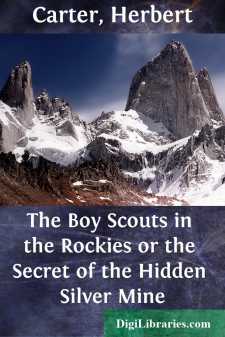 CHAPTER I. PERILS OF THE MOUNTAIN TRAIL.

"How is the cripple crowd coming on these days? Hello! Step Hen, any more snake bites? Hope you're not limping with that other leg, now?"

"I should say not, Thad. But I'm always going to believe you did a lot to keep the poison from getting into my system, when you sucked that wound."

"And how about your game limb, Giraffe—was it the right, or the left you bruised so badly on the stones when you fell?"

"The left one, Thad; but thank goodness it's healing up just prime, now. That magic salve did the business in great shape, I tell you."

"Allan, I notice that you still have a halt once in a while. That old bear trap sure took a nasty grip on your leg, didn't it, though?"

"It gave me an ugly pinch, Mr. Scout Master; and only for the fact of the springs being so weak and rusty that the owners had abandoned the trap, I might have been lame for three months. The witch hazel liniment you rubbed on helped a lot."

"Well, I'm glad to see you're all such a grateful lot, considering the little I was able to do for you. It's sure a pleasure to be patrol leader and assistant scoutmaster to such a wide-awake lot of boys as we have in the Silver Fox Patrol. Don't you think so, Toby Smathers?"

Thad Brewster turned a smiling face upon the sole man of the party, a genuine woods-ranger, such as the Government employs to look after the great forest reservations in the region of the Rocky Mountains, and the Coast, away up in the Northwest region.

"Wall, it strikes me they're a purty lively lot of scouts, all right; and lucky at that to hev a leader as leads, and holds the reins tight over 'em. And I'm glad myself to be guide to such a hefty bunch. That's what I'm asayin', Mr. Scout Master," the party addressed replied.

Outside of the guide there were just eight lads in the party; and from the fact that various parts of their attire suggested the well known khaki uniform which all Boy Scouts wear, the world around it was evident that these young fellows belonged to such an organization.

This was the exact fact, since they had come from far-away Cranford in an Eastern State, and were known as the Silver Fox Patrol of Cranford Troop; there being another patrol known as the Eagles, mustered in during the late winter.

Thad Brewster was the patrol leader; he was also a First Class Scout, and had qualified for the position of Assistant Scout Master, receiving his certificate from Headquarters many moons before.

Second in charge came Allan Hollister, a Maine boy, who had had considerable actual experience in wood's life, and to whom the rest of the patrol naturally turned whenever a knotty problem faced them during an outing.

The exceedingly fat and good-natured youth was Bumpus Hawtree, bugler of the troop, even though just now he was minus the instrument on which he was accustomed to sound the various calls, such as "reveille," "assembly," "taps," and so on, the most popular being the second, as it was usually associated with meals. Bumpus had been looked upon as the real tenderfoot scout, up to recently; but having become lost in the big timber recently, he had acquitted himself so splendidly, as recorded in the preceding volume, that his mates now regarded him as one who had been keeping his light under a bushel....