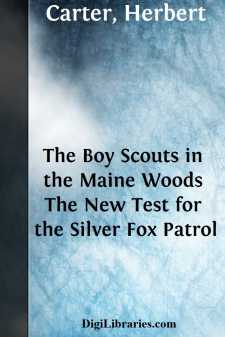 CHAPTER I.AFLOAT ON THE WINDING AROOSTOOK.

“I tell you, Bumpus Hawtree, I can do it as easy as turn my hand over, once I get the hang of the thing!”

“Oh! you don’t say so, Giraffe? Here you’ve been trying for these three days past, with your silly old bow and stick, twirling away like an organ grinder; and never so much as struck a single spark of fire yet.”

“Well, you see, there are a whole lot of things about the thing I don’t know.”

“Sure there are. You can do everything but the right thing. You spin that stick with the point that fits in the hole you made in that block of wood, like fun; but your fine tinder don’t even smoke, as far as I can see.”

“Huh! you’ll see it do more than that, and before the end of this Maine trip, I’ll give you to understand, Bumpus.”

“You needn’t say that like you didn’t believe I’d ever beat it out. I’ve made fires ten different ways, and you know that. And listen to me–I’m just bound to get one going in that South Sea Island method we’ve read about, ‘or give up trying!’ You hear me, Bumpus?”

“No trouble about that, Giraffe. Tell you what I’ll do, though, in the generosity of my heart–make a wager with you about that fire business; and it’s a treat of ice-cream for the crowd, for the loser.”

“I take you on that,” quickly snapped back the long-legged Boy Scout who was curled up in the stern of the canvas canoe that was being pushed along by the energetic arms of a sturdy guide, as straight as his name was the opposite, it being Eli Crooks.

“Then let’s have a clear understanding,” observed the fat lad, squatting rather awkwardly in the bow of the same craft; “say, you other fellows, d’ye hear what we’re talking about?” and he raised his voice a trifle, so that the occupants of the two other boats that were close by, might listen; just as if they had not been keeping their ears wide open; for when Bumpus and Giraffe got into a hot argument, there was generally plenty of fun in the air.

One of the other canoes contained three scouts, as could be told from various parts of their khaki uniforms that they wore, even when off on a hunting trip. The clear-eyed fellow who seemed to be in charge of the party was Thad Brewster; one of his companions was known as Step Hen Bingham, because, as a little chap he had insisted at school that was the way his name should be spelled, while the third was an exceedingly wiry boy, Davy Jones by name, and who had always been a human monkey when it came to athletics, climbing trees, and doing all sorts of queer stunts.

In the third boat was a shorter Maine guide, a sort of slow chap who came by the name of Jim Hasty just as the other did that of Crooks; and the scout with him was Allan Hollister, a lad born in the very State they were now exploring; and who assisted the scoutmaster in his duties.

All these six boys belonged to the Silver Fox Patrol connected with a troop of scouts located in a New York town called Cranford. Two more had been unable to take the Maine trip, which had already carried the bunch through some adventurous times in another part of the State, whither they had first gone in order to overtake a gentleman just then moose hunting, and with whom Thad had to get in touch for certain business reasons.

Now they were on the Aroostook River, the three boats, as well as the party, having been transported from Grindstone by rail, and launched at the junction of the Masardis with the first mentioned stream.

One of the guides having been brought up in this region, had promised the boys rare sport, if only they would trust to his judgment in the matter. The trip was of indefinite length, the only stipulation being that they should not go outside the United States, when approaching the New Brunswick border along the great St....