The Boy Scouts in the Blue Ridge Marooned Among the Moonshiners 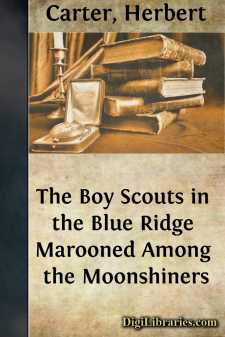 CHAPTER I. THE HIKE THROUGH THE SMOKY RANGE.

"Did anybody happen to see my knapsack around?"

"Why, you had it just a few minutes ago, Step Hen!"

"I know that, Bumpus; and I'd take my affidavy I laid it down on this rock."

"Well, don't whine so about a little thing like that, Step Hen; it ain't there now, and that's a fact."

"Somebody's gone and sneaked it on me, that's what. I'm the unluckiest feller in the whole bunch, for havin' queer things happen to him. Just can't lay a single thing I've got down anywhere, but what it disappears in the most remarkable way you ever heard of, and bobs up somewhere else! I must be haunted, I'm beginnin' to believe. Do you know anything about my knapsack, Giraffe?"

"Never touched your old grub sack, Step Hen; so don't you dare accuse me of playing a trick on you. Sure you didn't hang it up somewhere; I've known you to do some funny stunts that way;" and the tall boy called "Giraffe" by his mates, stretched his long neck in a most ridiculous manner, as he looked all around.

Eight boys were on a hike through the mountains of North Carolina. From the fact that they were all dressed in neat khaki uniforms it was evident that they must belong to some Boy Scout troop; and were off on a little excursion. This was exactly the truth; and they had come a long distance by rail before striking their present wild surroundings.

Their home town of Cranford was located in a big Northern State, and all the members of the Silver Fox Patrol lived there; though several of them had come to that busy little town from other sections of the country.

Besides two of those whose conversation has been noted at the beginning of this chapter there was, first of all, Thad Brewster, the leader of the patrol, and when at home acting as scoutmaster in the absence of the young man who occupied that position, in order to carry out the rules and principles of the organization. Thad was a bright lad, and having belonged to another troop before coming to Cranford, knew considerably more than most of his fellows in the patrol.

Next to him, as second in command, was Allan Hollister, a boy who had been raised to get the bumps of experience. He had lived for a time up in the Adirondacks, and also in Maine. When it came down to showing how things ought to be done according to the ways of woodsmen, and not by the book, the boys always looked to Allan for information.

Then there was a slender, rather effeminate, boy, who seemed very particular about his looks, as though he feared lest his uniform become soiled, or the shine on his shoes suffer from the dust of the mountain road. This was "Smithy." Of course he had another name when at home or in school—Edmund Maurice Travers Smith; but no ordinary boy could bother with such a high-flown appellation as this; and so "Smithy" it became as soon as he began to circulate among the lads of Cranford.

Next to him was a dumpy, rollicking sort of a boy, who seemed so clumsy in his actions that he was forever stumbling. He had once answered to the name of Cornelius Jasper Hawtree; but if anybody called out "Bumpus" he would smile, and answer to it....