The Boy Scouts In Russia 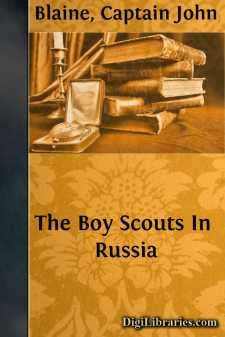 A train had just come to a stop in the border station of Virballen. Half of the platform of that station is in Russia; half of it in East Prussia, the easternmost province of the German empire. All trains that pass from one country to the other stop there. There are customs men, soldiers, policemen, Prussian and Russian, who form a gauntlet all travelers must run. Here passports must be shown, trunks opened. Getting in or out of Russia is not a simple business, even in the twentieth century. All sorts of people can't come in while a good many who try to get out are turned back, and may have to make a long journey to Siberia if they cannot account for themselves properly.

This train had stopped in the dead of night. But, dark and late as it was, there was the usual bustle and stir. Everyone had to wake up and submit to the questioning of police and customs men. About the only people who can escape such inquisition at Virballen or any other Russian border station are royalties and ambassadors. Most of the passengers, however, didn't have to come out on the platform. In this case, indeed, only two descended. One of these was treated by the police officials with marked respect. He was the sort of man to inspire both respect and fear. Very tall, he was heavily bearded, but not so heavily as to prevent the flashing of his teeth in a grim and unpleasant smile. Nor were his eyes hidden as the rays of the station lights fell upon them.

He was called "Excellency" by the policemen who spoke to him, but he ignored these men, save for a short, quick nod with which he acknowledged their respectful greetings. His whole attention was devoted to the boy by his side, who was looking up at him defiantly. This boy won a tribute of curious looks from all who saw him, and some glances of admiration when it became increasingly plain that he did not share the universal feeling of awe for the man by his side. This was accounted for, partly at least, it might be supposed, by the fact that he wasn't a Russian. The Americans in the train, had they been out on the platform, would have recognized him at once for he was sturdily and obviously American.

The train began to move. With a shrill shriek from the engine, and the banging of doors, it glided out of the station. Soon its tail lights were swinging out of sight. But the Russian and the American boy remained, while the train, with its load of free and cheerful passengers, went on toward Berlin.

"You wouldn't let me take the train. Well, what are you going to do with me now?" asked the boy.

His tone was as defiant as his look and if he was afraid, he didn't show it. He wasn't afraid, as a matter of fact. He was angry.

The Russian considered him for a moment, saying not a word. Then he called in a low, hushed tone, and three or four policemen came running up.

"It has pleased His Majesty the Czar, acting through the administration of the police of St. Petersburg, to expel him from his dominions....