The Boy Scouts' First Camp Fire or, Scouting with the Silver Fox Patrol 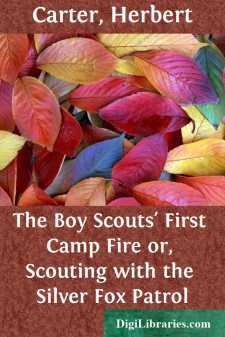 CHAPTER I. A HALT BY THE ROADSIDE.

Loud and clear sounded the notes of a bugle, blown by a very stout lad, clad in a new suit of khaki; and who was one of a bunch of Boy Scouts tramping wearily along a dusty road.

"Good for you, Bumpus! Can't he just make that horn talk, though?" cried one.

"Sounds as sweet as the church bell at home, fellows!" declared a second.

"Say, Mr. Scout-Master, does that mean a halt for grub?" a third called out.

"Sure, Giraffe. Brace up old fellow. You'll have your jaws working right soon, now. And here's a dandy little spring, right among the trees! How shady and cool it looks, Thad."

"That's why we kept on for an hour after noon," remarked the boy called Thad, and who seemed to be a person of some authority; "when all you scouts wanted to stop and rest. You see Davy, Allan here, and myself made a note of that same spring the other day, when we came along on horseback, spying out the lay of the land."

"Well, now," remarked the boy called Davy, as he threw himself down to stretch; "that's what our instruction book says,—a true scout always has his eyes and ears open to see and hear everything. The more things you can remember in a store window, after only a minute to look, the further up you are, see?"

The boy called Thad not only wore a rather seedy and faded scout khaki uniform; while those of all his comrades were almost brand new; but he had several merit badges fastened on the left side of his soft shirt.

These things would indicate that Thad Brewster must have been connected with some patrol, or troop of Boy Scouts, in the town where he formerly lived before his father, dying, left him in charge of the queer old bachelor uncle who was known far and wide among the boys of Scranton as plain "Daddy Brewster"—nobody ever understood why, save that he just loved all manner of young people.

In fact, it was a memory of the good times which he had enjoyed in the past that influenced Thad to start the ball rolling for a troop of scouts in Scranton. In this endeavor he had found energetic backing; and the Silver Fox Patrol of the troop was now starting out upon its first hike, to be gone several days.

Several of the eight boys forming this patrol were lagging more or less along the dusty road; for the brisk walk on this summer day had tired them considerably.

At the cheery notes of the bugle, blown by "Bumpus" Hawtree, the stray ones in uniform quickened their pace, so as to close up. Of course the stout youth had another name, and a very good one too, having been christened Cornelius Jasper. But his chums had long ago almost forgotten it, and as Bumpus he was known far and wide.

He was a good-natured chap, clumsy in his way, but always willing to oblige, and exceedingly curious. Indeed, his mates in the patrol declared Bumpus ought to have been born a girl, as he always wanted to "poke his nose into anything queer that happened to attract his attention." And this failing, of course, was going to get Bumpus into a lot of trouble, sooner or later.

His one best quality was a genuine love for music. He could play any sort of instrument; and had besides a wonderfully sweet high soprano voice, which he was always ready to use for the pleasure of his friends. That promised many a happy night around the camp-fire, when once the Silver Fox Patrol had become fully established.

And this love of music which the fat boy possessed had made the selection of a bugler for Cranford Troop the easiest thing possible. He actually had no competitor.

Presently the entire eight lads had thrown themselves down in such positions as seemed to appeal to them. Some lay flat on their stomachs, and drank from the overflow of the fine little spring; while others scooped up the water in the cup formed by the palms of their hands....