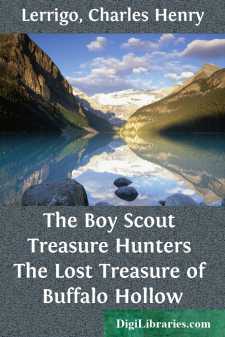 It was the supper hour at the State Industrial School for Boys, known to the general public as "The Reform School."

Glen Mason sat on a long bench trying to hold the place next to him against the stealthy ravages of the boys who crowded him.

"Where's Nixy?" he inquired angrily of his neighbor on the right. "Did he go to town again?"

"He's back," the boy replied. "Just got in an' had to go up and change his clothes. Had the toothache again to-day, he told me. Here he comes, now."

A lanky boy of fifteen or sixteen got into the vacant seat just as the chaplain rose to say grace. After grace no loud talking was permitted, but no objection was made to whispered conversations that did not become too noisy.

"How's it come you go to town so often and I don't ever get to go, Nixy?" whispered Glen, the moment grace was ended.

"One thing you don't have the toothache, another thing you get too many demerits. The fellows that get to town have to go thirty days without a black sign. You never could do it, Glen."

"I could if I wanted. I'm twenty days now. Wouldn't hurt me to go another ten. If I went to town alone I'd never come back."

"I could find a way to get around that," insisted Glen.

"Well, so could I. I've got one all planned out that I'm going to work some day. I'll get leave to go to the dentist late some afternoon. The car to come back leaves his office at five o'clock. He doesn't want to stay until five because he goes off to play golf. So he'll leave me in his waiting-room when he goes. I'll have a suit of overalls rolled up under my uniform. Soon as the doctor goes I'll change my clothes. You can't get out without being seen but I'll hide right there in the building till it closes and then get down the fire-escape."

"I guess somebody'd see you go down and a policeman would get you."

"I guess they wouldn't. I wouldn't try till late at night when there wasn't anybody around. Then I'd pick a dark night, and that fire-escape is in the back end of the building, so I guess there wouldn't nobody see me."

"Oh, mebbe there wouldn't. Supposin' you did get away. Where'd you go?"

"I'd have that all fixed. I'd put on my other clothes and pitch my uniform away and that night would get me twenty-five miles where nobody'd think of looking for me."

"Oh, I dunno. I guess you'd be easy picked up. Anybody could tell you a mile off. All to do is to look for a broom handle out walking all by itself."

"Broom handle yourself, Glen Mason. I've got the makings of a big man if ever I'd get enough to eat."

"You go high enough up to be a big man, but you've stretched too much. If you'd ever learn to be a contortionist and tie yourself into three knots close together, you'd do better."

"You're always saying something mean....