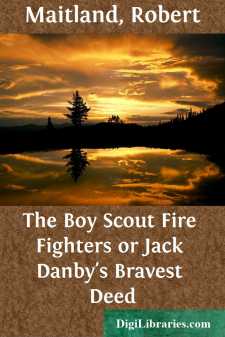 AT THE EDGE OF THE FIRE

A pall of smoke, dark, ugly, threatening, hung over a wood in which the Thirty-ninth Troop of the Boy Scouts had been spending a Saturday afternoon in camp. They had been hard at work at signal practice, semaphoring, and acquiring speed in Morse signaling with flags, which makes wireless unnecessary when there are enough signalers, covering enough ground.

The Scout camp was near the edge of the woods. Beyond its site stretched level fields, sloping gradually upward from them toward a wooded mountain. The smoke came from the mountain, and in the growing blackness over the mountain a circular ring proclaimed the spreading fire.

"Gee, that looks like some fire, Jack," said Pete Stubbs, a Tenderfoot Scout, to his chum, Jack Danby, head office-boy in the place where he and Pete both worked.

"I'm afraid it is," said Jack, looking anxiously toward it.

"I never saw one as big as that before," said Pete. "I've heard about them, but we never had one like that anywhere around here."

"We used to have pretty bad ones up at Woodleigh," returned Jack. "I don't like the looks of that fire a bit. It's burning slowly enough now, but if they don't look out, it'll get away from them and come sweeping down over the fields here."

"Say, Jack, that's right, too! I should think they'd want to be more careful there in the farmhouses. There's some of them pretty close to the edge of the woods over there."

Scout-Master Thomas Durland, who was in charge of the Troop, came up to them just then.

"Danby," he said, "take your signaling flags, and go over toward that fire. I want you to examine the situation and report if there seems to be any danger of the fire spreading to the lowlands and endangering anything there."

"Yes, sir," said Jack at once, raising his hand in the Scout salute and standing at attention as the Scout-Master, the highest officer of the Troop of Scouts, spoke to him. His hand was at his forehead, three middle fingers raised, and thumb bent over little finger.

"Take Scout Stubbs with you," said the Scout-Master. "You may need help in examining the country over there. I don't know much about it. What we want to find out is whether the ground is bare, and so likely to resist the fire, or if it is covered with stubble and short, dry growth that will burn quickly."

"Look out for water, too. There may be some brooks so small that we can't see them from here. But I'm afraid not. Every brook around here seems to be dried up. The drought has been so bad that there is almost no water left. A great many springs, even, that have never failed in the memory of the oldest inhabitants, have run dry in the last month or so. The wind is blowing this way, and the fire seems to be running over from the other side of Bald Mountain there. From the looks of the smoke, there must be a lot of fire on the other side."

No more orders were needed. The two Scouts, hurrying off, went across the clear space at the Scout pace, fifty steps running, then fifty steps walking. That is a better pace for fast travelling, except very short distances, than a steady run, for it can be kept up much longer without tiring, and Boy Scouts everywhere have learned to use it....