The Boy Scout Automobilists or, Jack Danby in the Woods 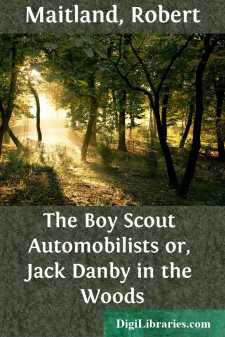 "What's this call for a special meeting of the Boy Scouts, Jack?" asked Pete Stubbs, a First Class Boy Scout, of his chum Jack Danby, who had just been appointed Assistant Patrol Leader of the Crow Patrol of the Thirty-ninth Troop.

"Well, I guess it isn't a secret any more," said Jack.

He and Pete Stubbs worked in the same place, and they were great chums, especially since Jack had enlisted his chum in the Boy Scouts.

"The fact is," he continued, "that Scout-Master Durland has been trying for several days to arrange the biggest treat the Troop, or any other Troop, has ever had. You know the State militia begins maneuvers pretty soon, Pete?"

"Say, Jack," cried red-haired Pete, dancing up and down in his excitement, "you don't mean to say that there's a chance that we are to go out with the militia?"

"I think this call means that there's more than a chance, Pete, and that the whole business is settled. You see, some of the fellows work in places where they might find it hard to get off. In the militia it's different. The law makes an employer give a man time off for the militia when it's necessary, but there's no reason why it should be that way for us. But Mr. Durland has been trying to get permission for all of us."

"I'll bet he didn't have any trouble here when he came to see Mr. Simms," said Pete, enthusiastically. "If all the bosses were like him, we'd be all right."

"They're not, Pete, though I guess most of them try to do what's fair, when they understand just how things are. But, anyhow, Mr. Simms thought it was a fine idea, and he went around and helped Mr. Durland with the other people, who weren't so ready to let off the Boy Scouts who happened to be working for them. And I guess that this call means that it's all fixed up, for if it hadn't been nothing would have been said about it."

Pete and Jack, with the other members of the Troop, reported at Scout headquarters that night, and gave Scout-Master Durland a noisy welcome when he rose to address them.

"Now," he said, "I want you to be quiet and listen to me. A great honor has been paid to the Troop. We have been invited to take part, as Scouts, in the coming maneuvers of the National Guard. There is to be a sham war, you know, and the militia of this State and the neighboring State, with some help from the regular army, are to take part in it. A troop of Boy Scouts has been selected from the other State, and after the militia officers had inspected all the Troops in this State they chose the Thirty-ninth."

He had to stop then for a minute to give the great cheer that greeted his announcement time to die away.

"Be still a minute, Pete. Mr. Durland isn't through yet."

"Now, I have gone around and got permission for all of you to go on this trip," the Scout-Master went on. "It's going to be different from anything we've ever done before. It's a great big experiment, and we're going to be watched by Boy Scouts and army and National Guard officers all over the country....