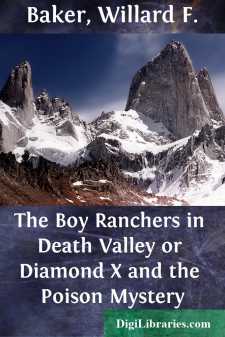 Excited shouts, mingled with laughter, floated on the sunlit and dust-laden air to the ranch house of Diamond X. Now and then, above the yells, could be heard the thudding of the feet of running horses on the dry ground.

"What do you reckon those boys are doing, Ma?" asked Nell Merkel as she paused in the act of laying the top crust on a raisin pie.

"Land knows," answered the girl's mother with half a sigh and half a chuckle. "They're always up to something. And, now that your Pa is away——"

Mrs. Merkel's remarks were interrupted by louder shouts from the corral, and Nell heard cries of:

"You missed him clean, that time!"

Like an echo to these sarcastic exclamations, Nell heard the voice of her brother Burton, commonly known as Bud, answer:

"I wonder what Bud's trying to do?" murmured Nell.

"Oh, run along and look if you want to," suggested Mrs. Merkel, with a kind regard for Nell's curiosity. "I'll finish the pie."

"Thanks!" And Nell, not even pausing to clap a hat over her curls, hastened out into the yard, across the stretch of grass that separated the main house from the other buildings of Diamond X and was soon approaching the corral where were kept the cow ponies needed for immediate use by the owner, his family or the various hands on the big estate.

Nell saw several cowboys perched on the corral fence, some with their legs picturesquely wound around the posts, others astraddle of the rails. Among them she sighted Dick and Nort Shannon, her two "city" cousins, who had come west to learn to be cowboys. And in passing it may be said that their education was almost completed now.

"Why, I wonder where Bud is?" asked Nell, as she made her way to the fenced-in place.

A moment later she received an answer to her question, for her brother arose from the dust of the corral and started for the fence. He seemed to have been rolling in the dirt.

"That's a queer way to have fun!" mused Nell.

Without making her presence known, she stood off a little way and watched what was going on. She saw Bud mount the fence near where the two Shannon boys were sitting, though hardly able to maintain their seats because of their laughter.

"Surest thing you know!" snapped back the boy rancher.

"Wait till I go in and get you a bit of fly paper!" suggested Nort.

"Fly paper! What for?" demanded Bud.

"Ho! Ho! That's pretty good!" shouted such a loud voice that Nell would have covered her ears only she knew, from past experience, that Yellin' Kid did not keep up his strident tones long. But this time he went on, like an announcer at a hog-calling contest, with: "Fly paper! Ho! Ho! So Bud can stick! That's pretty good!"

"Go ahead! Be nasty!" commented Bud good-naturedly as he climbed up the top rail and perched himself there in standing position while he looked over the dusty corral that was now a conglomeration of restless cow ponies....