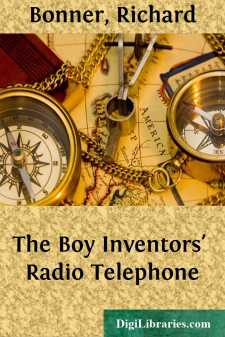 THE POWER OF THE AIR.

"Suffering speed laws of Squantum, but she can travel!" exclaimed Dick Donovan, redheaded and voluble.

"I tell you, electricity is the thing. Beats gasoline a million ways," chimed in Tom Jesson. Tom sat beside his cousin, Jack Chadwick, on the driver's seat of a curious-looking automobile which was whizzing down the smooth, broad, green-bordered road that led to Nestorville, the small town outside Boston where the Boy Inventors made their home.

The car that Jack Chadwick was driving differed in a dozen respects from an ordinary automobile. There was no engine hood in front. Instead of a bonnet the car, which was low slung, long and painted black, had a sharp prow of triangular shape. Its body, in fact, might be roughly compared to the form of a double-ended whaleboat.

As it sped along outside the city limits, and immune from hampering speed laws, the car emitted no sound.

It moved silently, without the usual sharp staccato rattle of the exhaust. Behind it there was no evil-smelling trail of gasoline and oil smoke. The car glided as silently as a summer breeze on its wire-wheels, like those of a bicycle enlarged.

"I'll get a great story out of this," declared Dick Donovan, who, as readers of other volumes of this series know, was a reporter on a Boston paper. "That is, if you'll let me write it," he added, leaning forward over the front seat from the tonneau as he spoke.

"How about it, Jack?" asked Tom with an amused smile. "Shall we let Dick here get famous at our expense again?"

"I don't see why not," said Jack. "Everything about the Electric Monarch is patented. The new reciprocating device, and the self-feeding storage batteries are fully covered. If Dick wants to write a romance about it he can, provided he leaves our pictures out."

"Nowhere near; I wouldn't dare to. I believe that the Monarch is capable of ninety miles an hour. I wish we had a place like Ormond Beach to try her out on."

"You can count me out on that," chuckled Dick. "This is fast enough for me."

The boys were trying out their latest invention, an electric car capable of making the speed of a gasoline-driven vehicle, and one which could be operated at a minimum of cost, almost a nominal expense, as compared with the high price of a vehicle run by an explosive engine.

It was the trial trip of the Electric Monarch, as they had decided to call it, and so far the performances of the machine had exceeded, instead of fallen below, their expectations. Dick, who had been invited to the "tryout," was full of questions as they sped silently, and with an absolute lack of vibration, along the road.

"How do you generate your electricity?" he asked eagerly.

"By a device geared to the rear axle," answered Tom. "It runs a sort of dynamo, though it would be difficult for you to understand it if I went into details. It's something like the ordinary generator and turns a constant stream of 'juice' into the storage batteries that, in turn, feed the engines."

"Yes, that's all plain enough," said the inquisitive Dick, "but how do you get your power for starting?"

"If there is not enough juice in the storage batteries for the purpose we resort to compressed air," was the reply from Tom, for Jack, with keen eyes on the unrolling ribbon of road, was too busy to have his attention distracted....