The Boy Allies with Haig in Flanders Or, the Fighting Canadians of Vimy Ridge 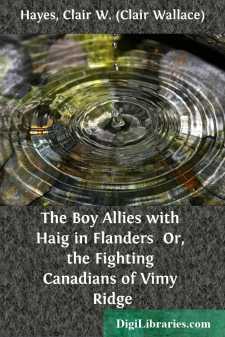 CHAPTER I A NEW USE FOR A DICTAPHONE

The rain fell in torrents over the great battlefield, as Hal Paine and Chester Crawford, taking advantage of the inky blackness of the night, crept from the shelter of the American trenches that faced the enemy across "No Man's Land."

In the trenches themselves all was silence. To a spectator it would have seemed that the occupants were, either dead or asleep; yet such was not the case.

It is true that most of the men had "turned in" for the night, sleeping on their arms, for there was no means of telling at what moment the enemy might issue from his trenches in another of the night raids that had marked this particular sector for the last few weeks; but the ever vigilant sentinels stood watch over the sleeping men. They would sound an alarm, should occasion demand, in ample time to arouse the sleepers if an enemy's head appeared in the darkness.

Hal and Chester, of course, left the American trenches with full knowledge of these sentinels; otherwise they might have been shot.

Once beyond the protecting walls of earth, they moved swiftly and silently toward the German trenches less than a hundred feet away — just the distance from the home plate to first base on a baseball diamond, as Hal put it — ninety feet.

These two lads, who now advanced directly toward the foe, were lieutenants in the first American expeditionary force to reach France to lend a hand in driving back the legions of the German Emperor, who still clung tenaciously to territory he had conquered in the early stages of the great war. These boys had, at one time, been captains in the British army, and had had three years of strenuous times and exciting adventures in the greatest of all wars.

Their captaincies they'd won through gallant action upon the field of battle. American lads, they had been left in Berlin at the outbreak of hostilities, when they were separated from Hal's mother. They made their way to Belgium, where, for a time, they saw service, with King Albert's troops. Later they fought under the tricolor, with the Russians and the British and Canadians.

When the United 'States declared war on Germany, Hal and Chester, with others, were sent to America, where they were of great assistance in training men Uncle Sam had selected to officer his troops. They had relinquished their rank in the British army to be able to do this. Now they found themselves again on French soil, but fighting under the Stars and Stripes.

On this particular night they advanced toward tile German lines soon after an audience with General John J. Pershing, commander-in-chief of the American expeditionary forces . In one hand Chester carried a little hardwood box, to which were attached coils of wire. In the other hand the lad held a revolver. Hal, likewise, carried his automatic in his hand. Each was determined to give a good account of himself should his presence be discovered.

It was unusually quiet along the front this night. It was too dark for opposing "snipers" — sharpshooters — to get in their work, and the voices of the big guns, which, almost incessantly for the last few weeks, had hurled shells across the intervening distance between the two lines of trenches, were stilled....