The Boy Allies on the Firing Line Or, Twelve Days Battle Along the Marne 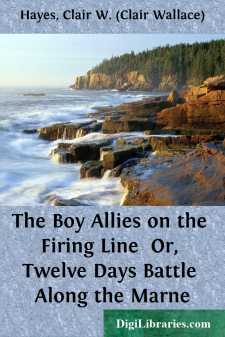 “Feels pretty good to be back in harness, doesn’t it, Hal?” asked Chester, as, accompanied by a small body of men, they rode slowly along.

“Great!” replied his friend enthusiastically. “And it looks as if we were to see action soon.”

The little body of British troopers, only forty-eight of them all told, with Hal Paine and Chester Crawford as their guides, were reconnoitering ten miles in advance of the main army along the river Marne in the great war between Germany and the allied armies. For several hours they had been riding slowly without encountering the enemy, when, suddenly, as the little squad topped a small hill and the two boys gained an unobstructed view of the little plain below, Hal pulled up his horse with an exclamation.

Quickly he threw up his right hand and the little troop came to an abrupt halt.

“And thousands of ’em,” said Chester. “They haven’t seen us yet. What is best to be done?”

The answer to this question came from the enemy. Several flashes of fire broke out along the German front, and the boys involuntarily ducked their heads as bullets sped whizzing past them.

“Well, they have seen us now,” said Hal; then turning to the men: “To the woods,” pointing with his sword to a dense forest on his right.

Rapidly the little body of men disappeared among the trees.

“Up in the trees,” ordered Hal, “and pick them off as they come!”

Swiftly the troopers leaped from their horses and climbed up among the branches. Here all could easily command a view of the oncoming German horde.

Rapidly the enemy advanced, firing volley after volley as they approached; then, at a word from Hal, the British poured forth their answer. And such an answer! Before the aim of these few British troopers, accounted among the best marksmen in the world, the Teuton cavalry went down in heaps.

There was a perceptible slackening in the speed of the approaching horsemen. Then, as the English continued their work, firing with machine-like precision and deadly accuracy, the Germans came to a halt.

“What are they stopping for?” cried Chester. “There are enough of them to overwhelm us!”

“I believe they fear a trap,” replied Hal. “They are afraid we are trying to ambush them with a larger force. We must keep up the delusion if we expect to get away.”

So saying, he ordered the men to the ground, and the little force advanced to the extreme edge of the woods. So far not a man had been even wounded, for the Germans, unable to see that their foe had climbed into the trees, had aimed too low.

From the edge of the woods the British poured several volleys, and then, as the enemy finally began an advance, they retreated slowly, firing as they flitted from tree to tree.

Apparently, Hal had rightly guessed the cause of the enemy’s indecision. They advanced slowly and warily; and when they finally gained the edge of the woods there was not a Briton in sight; but from further in among the trees the leaden messengers of death still struck the Germans, and man after man fell in his tracks.

Now the man nearest Chester threw up his arms and with a cry fell to the ground. The lad made as if to go to his assistance, but Hal stayed him with a word, and the little body of English continued their retreat, firing as they went.

Suddenly the pursued emerged from the woods into the open. A distance of half a mile lay between them and the next clump of trees. In this half a mile there was nothing that would afford shelter; and the Germans were approaching nearer every second.

Hal did not hesitate.

One more death-dealing volley was delivered at close range, and then the little troop of English turned and fled....