The Bounty of the Chesapeake Fishing in Colonial Virginia 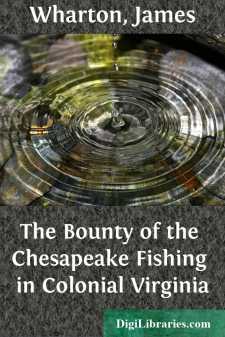 The Bounty of The Chesapeake

The voyage to America in 1607 was like a journey to a star. Veteran rovers though the English were, none of them had any clear idea of what to expect in the new land of Virginia. Only one thing was certain: they would have nothing there but what they took with them or wrought from the raw materials of the country.

They had reliable information that the climate was mild. Therefore, crops could be raised. They learned of inexhaustible timber: so ships and dwellings and industrial works could be built. They hoped for gold and dreamed of access to uncharted lands of adventure. But putting first things first, how would they eat in the meantime?

When Sir Walter Raleigh established the first English colony in "Virginia"—on what is now Roanoke island, North Carolina—two good reporters, one a writer, the other an illustrator, were commissioned to describe what they saw. This was twenty-two years before Jamestown and naturally all the material consisted of Indian life and customs. Thomas Hariot wrote:

For four months of the year, February, March, April and May, there are plenty of sturgeon; and also in the same months of herrings, some of the ordinary bigness as ours in England, but the most part far greater, of eighteen, twenty inches, and some two feet in length and better; both these kinds of fish in these months are most plentiful and in best season which we found to be most delicate and pleasant meat.

There are also trouts, porpoises, rays, oldwives, mullets, plaice, and very many other sorts of excellent good fish, which we have taken and eaten, whose names I know not but in the country language we have of twelve sorts more the pictures as they were drawn in the country with their names.

The inhabitants use to take them two manner of ways, the one is by a kind of weir made of reeds which in that country are very strong. The other way which is more strange, is with poles made sharp at one end, by shooting them into the fish after the manner as Irishmen cast darts; either as they are rowing in their boats or else as they are wading in the shallows for the purpose.

There are also in many places plenty of these kinds which follow:

Sea crabs, such as we have in England.

Oysters, some very great, and some small; some round and some of a long shape. They are found both in salt water and brackish, and those that we had out of salt water are far better than the other as in our own country.

Seekanauk, a kind of crusty shellfish which is good meat about a foot in breadth, having a crusty tail, many legs like a crab, and her eyes in her back. They are found in shallows of salty waters; and sometimes on the shore.

There are many tortoises both of land and sea kind, their backs and bellies are shelled very thick; their head, feet and tail, which are in appearance, seem ugly as though they were members of a serpent or venomous; but notwithstanding they are very good meat, as also their eggs. Some have been found of a yard in breadth and better....