The Boss and the Machine; a chronicle of the politicians and party organization 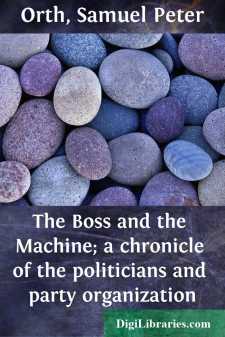 CHAPTER I. THE RISE OF THE PARTY

The party system is an essential instrument of Democracy. Wherever government rests upon the popular will, there the party is the organ of expression and the agency of the ultimate power. The party is, moreover, a forerunner of Democracy, for parties have everywhere preceded free government. Long before Democracy as now understood was anywhere established, long before the American colonies became the United States, England was divided between Tory and Whig. And it was only after centuries of bitter political strife, during which a change of ministry would not infrequently be accompanied by bloodshed or voluntary exile, that England finally emerged with a government deriving its powers from the consent of the governed.

The functions of the party, both as a forerunner and as a necessary organ of Democracy, are well exemplified in American experience. Before the Revolution, Tory and Whig were party names used in the colonies to designate in a rough way two ideals of political doctrine. The Tories believed in the supremacy of the Executive, or the King; the Whigs in the supremacy of Parliament. The Tories, by their rigorous and ruthless acts giving effect to the will of an un-English King, soon drove the Whigs in the colonies to revolt, and by the time of the Stamp Act (1765) a well-knit party of colonial patriots was organized through committees of correspondence and under the stimulus of local clubs called "Sons of Liberty." Within a few years, these patriots became the Revolutionists, and the Tories became the Loyalists. As always happens in a successful revolution, the party of opposition vanished, and when the peace of 1783 finally put the stamp of reality upon the Declaration of 1776, the patriot party had won its cause and had served its day.

Immediately thereafter a new issue, and a very significant one, began to divide the thought of the people. The Articles of Confederation, adopted as a form of government by the States during a lull in the nationalistic fervor, had utterly failed to perform the functions of a national government. Financially the Confederation was a beggar at the doors of the States; commercially it was impotent; politically it was bankrupt. The new issue was the formation of a national government that should in reality represent a federal nation, not a collection of touchy States. Washington in his farewell letter to the American people at the close of the war (1783) urged four considerations: a strong central government, the payment of the national debt, a well-organized militia, and the surrender by each State of certain local privileges for the good of the whole. His "legacy," as this letter came to be called, thus bequeathed to us Nationalism, fortified on the one hand by Honor and on the other by Preparedness.

The Confederation floundered in the slough of inadequacy for several years, however, before the people were sufficiently impressed with the necessity of a federal government. When, finally, through the adroit maneuver of Alexander Hamilton and James Madison, the Constitutional Convention was called in 1787, the people were in a somewhat chastened mood, and delegates were sent to the Convention from all the States except Rhode Island....