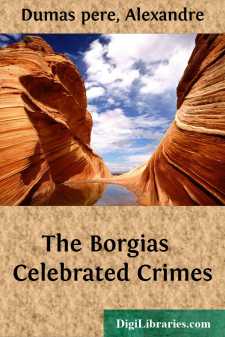 The contents of these volumes of 'Celebrated Crimes', as well as the motives which led to their inception, are unique. They are a series of stories based upon historical records, from the pen of Alexandre Dumas, pere, when he was not "the elder," nor yet the author of D'Artagnan or Monte Cristo, but was a rising young dramatist and a lion in the literary set and world of fashion.

Dumas, in fact, wrote his 'Crimes Celebres' just prior to launching upon his wonderful series of historical novels, and they may therefore be considered as source books, whence he was to draw so much of that far-reaching and intimate knowledge of inner history which has perennially astonished his readers. The Crimes were published in Paris, in 1839-40, in eight volumes, comprising eighteen titles—all of which now appear in the present carefully translated text. The success of the original work was instantaneous. Dumas laughingly said that he thought he had exhausted the subject of famous crimes, until the work was off the press, when he immediately became deluged with letters from every province in France, supplying him with material upon other deeds of violence! The subjects which he has chosen, however, are of both historic and dramatic importance, and they have the added value of giving the modern reader a clear picture of the state of semi-lawlessness which existed in Europe, during the middle ages. "The Borgias, the Cenci, Urbain Grandier, the Marchioness of Brinvilliers, the Marchioness of Ganges, and the rest—what subjects for the pen of Dumas!" exclaims Garnett.

Space does not permit us to consider in detail the material here collected, although each title will be found to present points of special interest. The first volume comprises the annals of the Borgias and the Cenci. The name of the noted and notorious Florentine family has become a synonym for intrigue and violence, and yet the Borgias have not been without stanch defenders in history.

Another famous Italian story is that of the Cenci. The beautiful Beatrice Cenci—celebrated in the painting of Guido, the sixteenth century romance of Guerrazi, and the poetic tragedy of Shelley, not to mention numerous succeeding works inspired by her hapless fate—will always remain a shadowy figure and one of infinite pathos.

The second volume chronicles the sanguinary deeds in the south of France, carried on in the name of religion, but drenching in blood the fair country round about Avignon, for a long period of years.

The third volume is devoted to the story of Mary Queen of Scots, another woman who suffered a violent death, and around whose name an endless controversy has waged. Dumas goes carefully into the dubious episodes of her stormy career, but does not allow these to blind his sympathy for her fate. Mary, it should be remembered, was closely allied to France by education and marriage, and the French never forgave Elizabeth the part she played in the tragedy.