The Border Watch A Story of the Great Chief's Last Stand 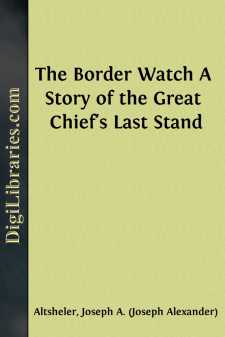 "He saw two warriors, and he lay in the bush while they passed only twenty yards away."  []

Printed in the United States of America

"The Border Watch" closes the series which began with "The Young Trailers," and which was continued successively in "The Forest Runners," "The Keepers of the Trail," "The Eyes of the Woods," "The Free Rangers," "The Riflemen of the Ohio," and "The Scouts of the Valley." All the eight volumes deal with the fortunes and adventures of two boys, Henry Ware and Paul Cotter, and their friends Shif'less Sol Hyde, Silent Tom Ross and Long Jim Hart, in the early days of Kentucky. The action moves over a wide area, from New Orleans in the South to Lake Superior in the North, and from the Great Plains in the West to the land of the Iroquois in the East.

It has been the aim of the author to present a picture of frontier life, and to show the immense hardships and dangers endured by our people, as they passed through the wilderness from ocean to ocean. So much of it occurred in the shadow of the forest, and so much more of it was taken as a matter of course that we, their descendants, are likely to forget the magnitude of their achievement. The conquest of the North American continent at a vast expense of life and suffering is in reality one of the world's great epics.

The author has sought to verify every statement that touches upon historical events. He has read or examined nearly all the books and pamphlets and many of the magazine articles formerly in the Astor and Lenox, now in the New York Public Library, dealing with Indian wars and customs. In numerous cases, narratives written by observers and participants have been available. He believes that all the border battles are described correctly, and the Indian songs, dances and customs are taken from the relations of witnesses.

But the great mass of material dealing with the frontier furnishes another striking illustration of the old saying that truth is stranger than fiction. No Indian story has ever told of danger and escape more marvelous than those that happened hundreds of times. The Indian character, as revealed in numerous accounts, is also a complex and interesting study. The same Indian was capable of noble actions and of unparalleled cruelty. As a forest warrior he has never been excelled. In the woods, fighting according to his ancient methods, he was the equal alike of Frenchman, Englishman and American, and often their superior. Many of the Indian chiefs were great men. They had the minds of statesmen and generals, and they prolonged, for generations, a fight that was doomed, from the beginning.

We lost more people in our Indian wars than in all the others combined, except the Civil War....