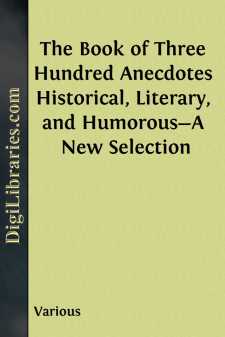 General St. Amour.—This officer, who distinguished himself in the Imperial service, was the son of a poor Piedmontese peasant, but he never forgot his humble extraction. While the army was in Piedmont, he invited his principal officers to an entertainment, when his father happened to arrive just as they were sitting down to table. This being announced to the general, he immediately rose, and stated to his guests his father's arrival. He said he knew the respect he owed to them, but at the same time he hoped they would excuse him if he withdrew, and dined with his father in another room. The guests begged that the father might be introduced, assuring him that they should be happy to see one so nearly related to him; but he replied, "Ah, no, gentlemen; my father would find himself so embarrassed in company so unsuited to his rank, that it would deprive us both of the only pleasure of the interview—the unrestrained intercourse of a parent and his son." He then retired, and passed the evening with his father.

The Deaf and Dumb Mother.—The late Countess of Orkney, who died at an advanced age, was deaf and dumb, and was married in 1753 by signs. She resided with her husband at his seat, Rostellan, near Cork. Shortly after the birth of her first child, the nurse saw the mother cautiously approach the cradle in which the infant lay asleep, evidently full of some deep design. The Countess, having first assured herself that her babe was fast asleep, took from under her shawl a large stone, which had purposely been concealed there, and, to the utter horror of the nurse, who largely shared the popular notion that all dumb persons are possessed of peculiar cunning and malignity, raised it up, as if to enable her to dash it down with greater force. Before the nurse could interpose to prevent what she believed would bring certain death to the sleeping and unconscious child, the dreadful stone was flung, not at the cradle, however, but upon the ground, and fell with great violence. The noise awakened the child. The Countess was overjoyed, and, in the fulness of a mother's heart, she fell upon her knees to express her thankfulness that her beloved infant possessed a blessing denied to herself—the sense of hearing. This lady often gave similar indications of superior intelligence, though we can believe that few of them equalled the present in interest.

Filial Affection.—A veteran, worn out in the service of France, was left without a pension, although he had a wife and three children to share his wretchedness. His son was placed at L'Ecole militaire, where he might have enjoyed every comfort, but the strongest persuasion could not induce him to taste anything but coarse bread and water. The Duke de Choiseul being informed of the circumstance, ordered the boy before him, and enquired the reason of his abstemiousness. The boy, with a manly fortitude, replied, "Sir, when I had the honour of being admitted to this royal foundation, my father conducted me hither....