The Book of the Epic 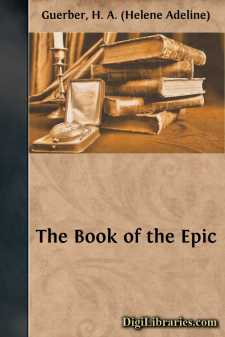 Every now and then in our reading we come suddenly face to face with first things,—the very elemental sources beyond which no man may go. There is a distinct satisfaction in dealing with such beginnings, and, when they are those of literature, the sense of freshness is nothing short of inspiring. To share the same lofty outlook, to breathe the same high air with those who first sensed a whole era of creative thoughts, is the next thing to being the gods' chosen medium for those primal expressions.

All this is not to say that the epic is the oldest form of literary expression, but it is the expression of the oldest literary ideas, for, even when the epic is not at all primitive in form, it deals essentially with elemental moods and ideals. Epical poetry is poetic not because it is metrical and conformative to rhythmical standards,—though it usually is both,—but it is poetry because of the high sweep of its emotional outlook, the bigness of its thought, the untamed passion of its language, and the musical flow of its utterance.

Here, then, we have a veritable source book of the oldest ideas of the race; but not only that—we are also led into the penetralia of the earliest thought of many separate nations, for when the epic is national, it is true to the earliest genius of the people whose spirit it depicts.

To be sure, much of literature, and particularly the literature of the epic, is true rather to the tone of a nation than to its literal history—by which I mean that Achilles was more really a Greek hero than any Greek who ever lived, because he was the apotheosis of Greek chivalry, and as such was the expression of the Greeks rather than merely a Greek. The Iliad and the Odyssey are not merely epics of Greece—they are Greek.

This is an age of story-telling. Never before has the world turned so attentively to the shorter forms of fiction. Not only is this true of the printed short-story, of which some thousands, more or less new, are issued every year in English, but oral story-telling is taking its deserved place in the school, the home, and among clubs specially organized for its cultivation. Teachers and parents must therefore be increasingly alert, not only to invent new stories, but—this even chiefly—to familiarize themselves with the oldest stories in the world.

So it is to such sources as these race-narratives that all story-telling must come for recurrent inspirations. The setting of each new story may be tinged with what wild or sophisticated life soever, yet must the narrator find the big, heart-swelling movements and passions and thraldoms and conquests and sufferings and elations of mankind stored in the great epics of the world.

It were a life-labor to become familiar with all of these in their expressive originals; even in translation it would be a titanic task to read each one. Therefore how great is our indebtedness to the ripe scholarship and discreet choice of the author of this "Book of the Epic" for having brought to us not only the arguments but the very spirit and flavor of all this noble array....