The Book of the Damned 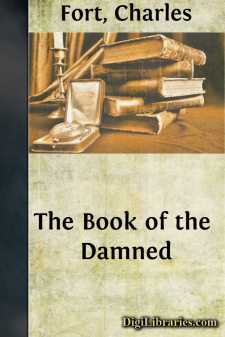 A procession of the damned.

By the damned, I mean the excluded.

We shall have a procession of data that Science has excluded.

Some of them are corpses, skeletons, mummies, twitching, tottering, animated by companions that have been damned alive. There are giants that will walk by, though sound asleep. There are things that are theorems and things that are rags: they'll go by like Euclid arm in arm with the spirit of anarchy. Here and there will flit little harlots. Many are clowns. But many are of the highest respectability. Some are assassins. There are pale stenches and gaunt superstitions and mere shadows and lively malices: whims and amiabilities. The naïve and the pedantic and the bizarre and the grotesque and the sincere and the insincere, the profound and the puerile.

A stab and a laugh and the patiently folded hands of hopeless propriety.

The ultra-respectable, but the condemned, anyway.

The aggregate appearance is of dignity and dissoluteness: the aggregate voice is a defiant prayer: but the spirit of the whole is processional.

The power that has said to all these things that they are damned, is Dogmatic Science.

The irresistibleness of things that neither threaten nor jeer nor defy, but arrange themselves in mass-formations that pass and pass and keep on passing.

So, by the damned, I mean the excluded.

But by the excluded I mean that which will some day be the excluding.

Or everything that is, won't be.

And everything that isn't, will be—

But, of course, will be that which won't be—

It is our expression that the flux between that which isn't and that which won't be, or the state that is commonly and absurdly called "existence," is a rhythm of heavens and hells: that the damned won't stay damned; that salvation only precedes perdition. The inference is that some day our accursed tatterdemalions will be sleek angels. Then the sub-inference is that some later day, back they'll go whence they came.

It is our expression that nothing can attempt to be, except by attempting to exclude something else: that that which is commonly called "being" is a state that is wrought more or less definitely proportionately to the appearance of positive difference between that which is included and that which is excluded.

But it is our expression that there are no positive differences: that all things are like a mouse and a bug in the heart of a cheese. Mouse and a bug: no two things could seem more unlike. They're there a week, or they stay there a month: both are then only transmutations of cheese....