The Book of the Cat 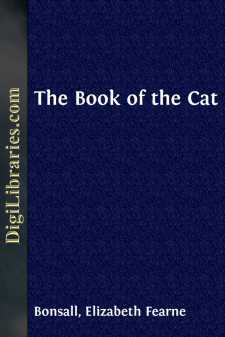 Down at my feet on the red tiles in front of a roaring great fire sit a great black cat and a soft white Angora pussy. They are named Ebony and Snowball and are as different in nature as they are in colour, but are devoted friends for all that. Possibly because of it! for where Snowball is timid, Ebony will bravely lead the way; while if Ebony is cross, Snowball will purr and coax and cuddle until he gradually grows peaceful and pleasant again.

From the time he was a tiny kitten Ebony had known no home, and such food as he had was picked up when and wherever he chanced to find it. He had won many and lost few of his many cat battles, but he did not like to fight and never did it unless obliged to.

Snowball had never struck or received a blow in all of her carefully guarded life. She was a finely bred Angora that had taken many prizes at the cat shows, while her meals—far from being irregularly picked up—had always been brought to her on a silver tray as regularly as the sun rose—and considerably oftener!

One bright cold November afternoon Snowball was wandering restlessly around looking for something—anything—some excitement! As she passed the Dresden saucer filled with rich cream she sniffed, and when she caught sight of her silk-cushioned basket she fairly switched her tail. Even the favourite spot on the warm hearth failed to allure.

Outside the wind blew the few remaining leaves from the trees in tempting swirls to the pavement, but she could not play with them. She was shut indoors for fear she might be stolen or stray! Stray! She would run away as soon as she found the chance!

As she wandered into the broad hall some one opened the front door to pass through it, and Miss Pussy saw and seized her chance. Like a flash she darted down the steps and up the street, never stopping until she was well out of sight of the house. Then she paused and looked curiously around.

Close under the railing of a shabby area, not many blocks from Snowball's home, she spied three rough-coated, gaunt cats greedily drinking from a dish of sooty skim milk. The saucer was thick and cracked, and—worse yet!—had not been washed since it contained boiled onions, but to the pampered runaway it seemed far more desirable than the cream she had left untasted in her own Dresden china plate.

As she edged slowly toward them the three waifs paid no attention to her, beyond giving a warning growl or two, which Snowball—not understanding that she could be unwelcome—mistook for their usual way of speaking. With a friendly "P-r-r-r-rh!" of greeting she drew near, and lapped daintily at the strongly flavoured milk. Was it hunger, or the feeling of liberty and comradeship that made it taste so good and made her for one short instant perfectly happy?

Then a stinging blow on one ear, followed immediately by a sharp slap on the side of her head from the big grey cat, sent her reeling dizzily away from the dish. She recovered herself and turned in abject terror, her one thought to escape from this uncalled for abuse, but directly in her path stood the black-and-white cat with lashing tail and flaming eyes. Another turn, and she was again confronted by the grey, crouching angrily ready for another attack.

Snowball's heart seemed to stand still, and she shut her eyes and waited for the end, when with one bound the black cat stood between her and her enemies. He began battle instantly, and so vigourously that it was impossible to stand before the whirlwind of flying claws and snapping teeth that he seemed to have become....