The Book of Stories for the Story-teller 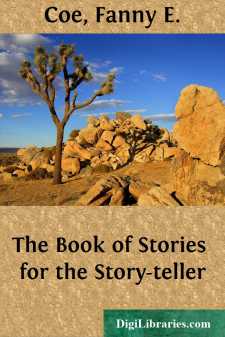 here is no need here to enter a plea for story-telling. Its value in the home and in the school is assured. Miss Bryant, in her charming book, How to Tell Stories to Children, says, "Perhaps never, since the really old days, has story-telling so nearly reached a recognized level of dignity as a legitimate and general art of entertainment as now." And, in the guise of entertainment, the story is often the vehicle conveying to the child the wholesome moral lesson or the bit of desirable knowledge so necessary to his well-being at the time. Thus it has come to be recognized that the ability to tell a story well is an important part of the equipment of the parent or the teacher of little children.

The parent is often at a loss for fresh material. Sometimes he "makes up" a story, with but poor satisfaction to himself or his child. The teacher's difficulty is quite otherwise. She knows of many good stories, but these same stories are scattered through many books, and the practical difficulty of finding time in her already overcrowded days for frequent trips to the library is well-nigh insurmountable. The quest is indefinitely postponed, with the result that the stories are either crowded out altogether, or that the teacher repeats the few tales she has at hand month after month, and year after year, until all freshness and inspiration are gone from the story time.

The stories in the present collection are drawn from many nations and from widely differing sources. Folk tales, modern fairy tales, and myths have a generous showing; and there is added a new field as a source for stories. This is Real Life, in which children soon begin to take decided interest. Under this heading appear tales of child life, of child heroes, of adult heroes, and of animals.

Mr Herbert L. Willett, of the University of Chicago, has said: "It is not through formal instruction that a child receives his impulses toward virtue, honour and courtesy. It is rather from such appeal to the emotions as can be made most effectually through the telling of a story. The inculcation of a duty leaves him passionless and unmoved. The narrative of an experience in which that same virtue finds concrete embodiment fires him with the desire to try the same conduct for himself. Few children fail to make the immediate connection between the hero or heroine of the story and themselves."

Because of this great principle of imitation, a large number of the stories in this little volume have been chosen for their moral value. They present the virtues of persistence, faithfulness, truthfulness, honesty, generosity, loyalty to one's word, tender care of animals, and love of friends and family. Some themes are emphasized more than once. "Hans the Shepherd Boy," "The Story of Li'l' Hannibal," and "Dust under the Rug," teach wholesome facts in regard to work. "The Feast of Lanterns" and "The Pot of Gold" emphasize the truth that

Filial devotion shines from the stories of "Anders' New Cap," "How the Sun, the Moon, and the Wind went out to Dinner," and "The Wolf-Mother of Saint-Ailbe."

The form of each story is such that the parent or teacher can tell or read the story, as it appears in the book, with only such slight modification as his intimate knowledge of the individual child or class would naturally prompt him to make....