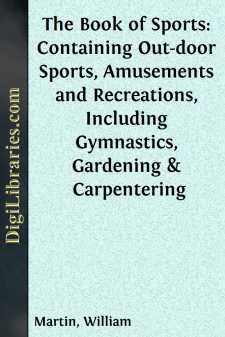 The prime object of this book is to induce and to teach boys and girls to spend their hours out of school in such a manner, as to gain innocent enjoyment while they promote their own health and bodily strength. The Author has never lost sight of this object, considering it to be what properly belongs to a Book of Sports.

He has, however, in many instances, had in view, in a subordinate degree, the intellectual improvement of his young readers. He hopes that several of the games, now described in print for the first time, will be found, if not "royal roads," at least delightful ones, to the knowledge of many scientific facts. There seems to be no good reason why the utile (considered intellectually as well as bodily) should not find its place in the sports of young people, if it be so skilfully combined with the dulce as not to convert pleasure into toil.

To those who assent to what has been stated, the introduction of a chapter on gardening will need no apology.

PART I. GAMES WITH MARBLES.

One of the best games with marbles is

This is played in the following manner:—A circle should be drawn about four feet in diameter, and an inner circle of about six inches being also marked out in its centre, into this each boy puts a marble. "Now then, boys, knuckle down at the offing, which is in any part of the outer circle. Now, whoever shoots a marble out of the ring is entitled to go on again: so mind your shots; a good shot may clear the ring. After the first shot, the players do not shoot from the offing, but from the place where the marble stops after it has been shot from the knuckle. Every marble struck out of the ring belongs to the party who hits it; but if the taw remains in the inner ring, either after it has struck a marble or not, the player is out, and must put in all the marbles he has won. If one player strike another player's taw, the player to whom the taw belongs is out; and he must give up all the marbles he has won to the player whose taw struck his."

LAG OUT OR KNOCK OUT.

This game is played by throwing a marble against the wall, which rebounds to a distance. Others then follow; and the boy whose marble strikes against any of the others is the winner. Some boys play the game in a random manner; but the boy who plays with skill judges nicely of the law of forces, that is, he calculates exactly the force of the rebound, and the direction of it.

The first law of motion is, that everything preserves a state of rest, or of uniform rectilineal (that is, straight, motion), unless affected by some moving force.

Second law.—Every change of motion is always proportioned to the degree of the moving force by which it is produced, and it is made in the line of direction in which that force is impressed.

To illustrate the first of these laws,—a marble will never move from the ground of itself, and once put in motion, it will preserve that motion until some other power operates upon it in a contrary direction....