The Book of Nature Myths 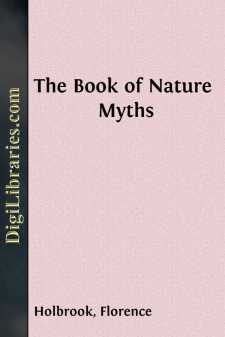 Add to My Favorites
Published: 9 years ago
Downloads: 163
Rating: (0 Votes)

PART I. THE GREAT FIRE-MOUNTAIN.

Long, long ago, when the earth was very young, two hunters were traveling through the forest. They had been on the track of a deer for many days, and they were now far away from the village where they lived. The sun went down and night came on. It was dark and gloomy, but over in the western sky there came a bright light.

"No," said the other. "We have watched many and many a night to see the great, round moon rise above the trees. That is not the moon. Is it the northern lights?"

"No, the northern lights are not like this, and it is not a comet. What can it be?"

It is no wonder that the hunters were afraid, for the flames flared red over the sky like a wigwam on fire. Thick, blue smoke floated above the flames and hid the shining stars.

"Do the flames and smoke come from the wigwam of the Great Spirit?" asked one.

"I fear that he is angry with his children, and that the flames are his fiery war-clubs," whispered the other. No sleep came to their eyes. All night long they watched and wondered, and waited in terror for the morning.

When morning came, the two hunters were still watching the sky. Little by little they saw that there was a high mountain in the west where the light had been, and above the mountain floated a dark blue smoke. "Come," said one, "we will go and see what it is."

They walked and walked till they came close to the mountain, and then they saw fire shining through the seams of the rocks. "It is a mountain of fire," one whispered. "Shall we go on?" "We will," said the other, and they went higher and higher up the mountain. At last they stood upon its highest point. "Now we know the secret," they cried. "Our people will be glad when they hear this."

Swiftly they went home through the forest to their own village. "We have found a wonder," they cried. "We have found the home of the Fire Spirit. We know where she keeps her flames to help the Great Spirit and his children. It is a mountain of fire. Blue smoke rises above it night and day, for its heart is a fiery sea, and on the sea the red flames leap and dance. Come with us to the wonderful mountain of fire."

The people of the village had been cold in the winter nights, and they cried, "O brothers, your words are good. We will move our lodges to the foot of the magic mountain. We can light our wigwam fires from its flames, and we shall not fear that we shall perish in the long, cold nights of winter."

So the Indians went to live at the foot of the fire-mountain, and when the cold nights came, they said, "We are not cold, for the Spirit of Fire is our good friend, and she keeps her people from perishing."

PART II. THE FROLIC OF THE FLAMES.

For many and many a moon the people of the village lived at the foot of the great fire-mountain. On summer evenings, the children watched the light, and when a child asked, "Father, what makes it?" the father said, "That is the home of the Great Spirit of Fire, who is our good friend." Then all in the little village went to sleep and lay safely on their beds till the coming of the morning....