The Book of Art for Young People 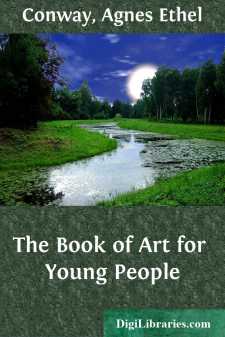 Almost the pleasantest thing in the world is to be told a splendid story by a really nice person. There is not the least occasion for the story to be true; indeed I think the untrue stories are the best—those in which we meet delightful beasts and things that talk twenty times better than most human beings ever do, and where extraordinary events happen in the kind of places that are not at all like our world of every day. It is so fine to be taken into a country where it is always summer, and the birds are always singing and the flowers always blowing, and where people get what they want by just wishing for it, and are not told that this or that isn't good for them, and that they'll know better than to want it when they're grown up, and all that kind of thing which is so annoying and so often happening in this obstinate criss-cross world, where the days come and go in such an ordinary fashion.

But if I might choose the person to tell me the kind of story I like to listen to, and hear told to me over and over again, it would be some one who could draw pictures for me while talking—pictures like those of Tenniel in Alice in Wonderland and Through the Looking-Glass. How much better we know Alice herself and the White Knight and the Mad Hatter and all the rest of them from the pictures than even from the story itself. But my story-teller should not only draw the pictures while he talked, but he should paint them too. I want to see the sky blue and the grass green, and I want red cloaks and blue bonnets and pink cheeks and all the bright colours, and some gold and silver too, and not merely black and white—though black and white drawings would be better than nothing, so long as they showed me what the people and beasts and dragons and things were like. I could put up with even rather bad drawings if only they were vivid. Don't you know how good a bad drawing sometimes seems? I have a friend who can make the loveliest folks and the funniest beasts and the quaintest houses and trees, and he really can't draw a bit; and the curious thing is, that if he could draw better I should not like his folks and beasts half as much as I do the lop-sided, crook-legged, crazy-looking people he produces. And then he has such quaint things to tell about them, and while he talks he seems to make them live, so that I can hardly believe they are not real people for all their unlikeness to any one you ever saw.

Now, the old pictures you see in the picture galleries are just like that, only the people that painted them didn't invent the stories but merely illustrated stories which, at the time those painters lived, every one knew. Some of the stories were true and some were just a kind of fairy tale, and it didn't matter to the painters, and it doesn't matter to us, which was true and which wasn't. The only thing that matters is whether the story is a good one and whether the picture is a nice one. There is a delightful old picture painted on a wall away off at Assisi, in Italy, which shows St....