The Book-Hunter A New Edition, with a Memoir of the Author 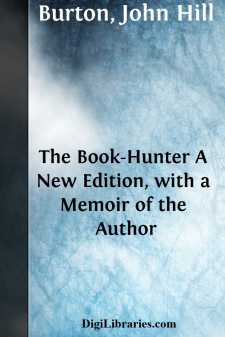 John Hill Burton, the subject of this notice, was born on the 22d of August 1809, in the Gallowgate of Aberdeen. He was wont to style himself, as in his childhood he had heard himself described, "The last of the Gallowgate bairns;" the Gallowgate being an old part of Aberdeen devoted chiefly to humble trade, no one, in modern times at least, even distantly connected with gentility living there.

His father, William Kinninmont Burton, is believed to have been an only son, and no kith or kin of his were ever seen or heard of by his children. The only relic of their father's family possessed by them is a somewhat interesting miniature on ivory, well painted in the old-fashioned style, representing a not beautiful lady in antique head-dress and costume, and marked on the back "Mary Burton." William Kinninmont Burton held a commission in the army, though he had not been originally intended for a military life. He was, it is supposed, engaged in trade in London when the military enthusiasm, excited by the idea of an invasion of Great Britain by Napoleon, fired him, like so many other young men, into taking up arms as a volunteer. In the end of last century he came to Aberdeen as a lieutenant in a regiment of "Fencibles," or some such volunteer title, and there captivated the affections of a beautiful young lady, Miss Eliza Paton, a daughter of the laird of Grandholm, an estate four miles distant from Aberdeen. Of this lady and of her family a few words must be said.

So small was the value of land in Scotland in the beginning of the century, that it is safe to suppose the estate of Grandholm yielded less than one-third of its present rental. The circumstances and social position of the family were, besides, seriously lowered by the extraordinary character of the then laird. John Paton, grandfather of Dr Burton, was a man not devoid of talent, and of a strikingly handsome gentlemanly appearance and manner. He married, early in life, a beautiful Miss Lance, an Englishwoman, who, after bearing him ten children in about as many years, fell into a weak state of health, of mind as well as body. The laird nursed his wife devotedly for a long period of years, cherishing her to the exclusion of all other persons or interests. His children he regarded as the enemies of his adored wife, and consequently of himself, and his conduct to them from first to last was little less than brutal. When the enfeebled wife at last died, the husband's grief verged on madness.

He would not allow her body to be buried in the ordinary manner, but caused a tomb to be erected in a wood near the house of Grandholm, where the corpse was placed in an open coffin, and where the bereaved husband could go daily to bewail his loss. The distracted mourner rejected all attentions from children, relatives, or friends, yet apparently dreaded being left alone, for he advertised for a male companion or keeper to bear him company....