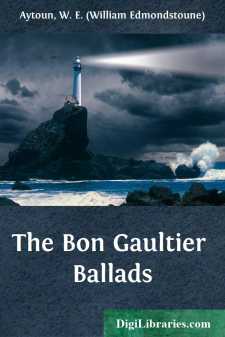 A further edition of this book—the sixteenth—having been called for, I have been asked by the publishers to furnish a preface to it.  For prefaces I have no love.  Books should speak for themselves.  Prefaces can scarcely be otherwise than egotistic, and one would not willingly add to the too numerous illustrations of this tendency with which the literature of the day abounds.  I would much rather leave the volume with the simple “Envoy” which I wrote for it when the Bon Gaultier Ballads were first gathered into a volume.  There the products of the dual authorship of Aytoun and myself were ascribed to the Bon Gaultier under whose editorial auspices they had for the most part seen the light.  But my publishers tell me that people want to know why, and how, and by which of us these poems were written,—curiosity, complimentary, no doubt, but which it is by no means easy for the surviving bard to satisfy.  It is sixty years since most of these verses were written with the light heart and fluent pen of youth, and with no thought of their surviving beyond the natural life of ephemeral magazine pieces of humour.  After a long and very crowded life, of which literature has occupied the smallest part, it is difficult for me to live back into the circumstances and conditions under which they were written, or to mark, except to a very limited extent, how far to Aytoun, and how far to myself, separately, the contents of the volume are to be assigned.  I found this difficult when I wrote Aytoun’s Life in 1867, and it is necessarily a matter of greater difficulty now in 1903.

I can but endeavour to show how Aytoun and I came together, and how for two or three years we worked together in literature.  Aytoun (born 21st June 1813) was three years older than myself, and he was known already as a writer in ‘Blackwood’s Magazine’ when I made his acquaintance in 1841.  For some years I had been writing in Tait’s and Fraser’s Magazines, and elsewhere, articles and verses, chiefly humorous, both in prose and verse, under the nom de guerre of Bon Gaultier.  This name, which seemed a good one for the author of playful and occasionally satirical papers, had caught my fancy in Rabelais, where he says of himself, “A moy n’est que honneur et gloire d’estre diet et reputé Bon Gaultier et bon Compaignon; en ce nom, suis bien venue en toutes bonnes compaignees de Pantagruelistes.”

It was to one of these papers that I owed my introduction to Aytoun.  What its nature was may be inferred from its title—“Flowers of Hemp; or, The Newgate Garland.  By One of the Family.”  Like most of the papers on which we subsequently worked together, the object was not merely to amuse, but also to strike at some prevailing literary craze or vitiation of taste.  I have lived to see many such crazes since.  Every decade seems to produce one.  But the particular craze against which this paper was directed was the popularity of novels and songs, of which the ruffians of the Newgate Calendar were the accepted heroes.  If my memory does not deceive me, it began with Harrison Ainsworth’s ‘Rookwood,’ in which the gallantries of Dick Turpin, and the brilliant description of his famous Ride to York, caught the public fancy.  Encouraged by the success of this book, Ainsworth next wooed the sympathies of the public for Jack Sheppard and his associates in his novel of that name.  The novel was turned into a melodrama, in which Mrs Keeley’s clever embodiment of that “marvellous boy” made for months and months the fortunes of the Adelphi Theatre; while the sonorous musical voice of Paul Bedford as Blueskin in the same play brought into vogue a song with the refrain,

which travelled everywhere, and made the patter of thieves and burglars “familiar in our mouths as household words.”  It deafened us in the streets, where it was as popular with the organ-grinders and German bands as Sullivan’s brightest melodies ever were in a later day.  It clanged at midday from the steeple of St Giles, the Edinburgh cathedral; it was whistled by every dirty “gutter-snipe,” and chanted in drawing-rooms by fair lips, that, little knowing the meaning of the words they sang, proclaimed to their admiring friends—

“In a box of the stone jug I was born,Of a hempen widow the kid forlorn;My noble father, as I’ve heard say,Was a famous marchant of capers gay;”

ending with the inevitable and insufferable chorus,

Soon after the Newgate Calendar was appealed to for a hero by the author of ‘Pelham,’ who had already won no small distinction, and who in his ‘Paul Clifford’ did his best to throw a halo of romance around the highwayman’s career.  Not satisfied with this, Bulwer next claimed the sympathies of his readers for Eugene Aram, and exalted a very common type of murderer into a nobly minded and highly sentimental scholar.  Crime and criminals became the favourite theme of a multitude of novelists of a lower class.  They even formed the central interest of the ‘Oliver Twist’ of Charles Dickens, whose Fagin and his pupil “the Artful Dodger,” Bill Sykes and Nancy, were simultaneously presented to us in their habits as they lived by the genius of George Cruikshank, with a power that gave a double interest to Dickens’s masterly delineation of these worthies....