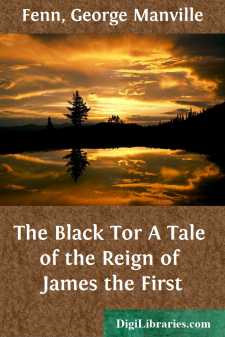 About as rugged, fierce-looking a gang of men as a lad could set eyes on, as they struggled up the steep cliff road leading to the castle, which frowned at the summit, where the flashing waters of the Gleame swept round three sides of its foot, half hidden by the beeches and birches, which overhung the limpid stream. The late spring was at its brightest and best, but there had been no rain; and as the men who had waded the river lower down, climbed the steep cliff road, they kicked up the white limestone dust, and caked their wet high boots, which, in several instances, had opened holes in which toes could be seen, looking like curious reptiles deep in gnarled and crumpled shells.

“Beggars! What a gang!” said Ralph Darley, a dark, swarthy lad of perhaps seventeen, but looking older, from having an appearance of something downy beginning to come up that spring about his chin, and a couple of streaks, like eyebrows out of place, upon his upper lip. He was well dressed, in the fashion of Solomon King James’s day; and he wore a sword, as he sat half up the rugged slope, on a huge block of limestone, which had fallen perhaps a hundred years before, from the cliff above, and was mossy now, and half hidden by the ivy which covered its side.

“Beggars,” he said again; “and what a savage looking lot.”

As they came on, it began to dawn upon him that they could not be beggars, for if so, they would have been the most truculent-looking party that ever asked for the contributions of the charitable. One, who seemed to be their leader, was a fierce, grizzled, red-nosed fellow, wearing a rusty morion, in which, for want of a feather, a tuft of heather was stuck; he wore a long cloak, as rusty-looking as his helmet; and that he carried a sword was plain enough, for the well-worn scabbard had found a very convenient hole in the cloak, through which it had thrust itself in the most obtrusive manner, and looked like a tail with a vicious sting, for the cap of the leathern scabbard had been lost, and about three inches of steel blade and point were visible.

Ralph Darley was quick at observation, and took in quickly the fact that all the men were armed, and looked shabbier than their leader, though not so stout; for he was rubicund and portly, where he ought not to have been, for activity, though in a barrel a tubby space does indicate strength. Neither were the noses of the other men so red as their leader’s, albeit they were a villainous-looking lot.

“Not beggars, but soldiers,” thought Ralph; “and they’ve been in the wars.”

He was quite right, but he did not stop to think that there had been no wars for some years. Still, as aforesaid, he was right, but the war the party had been in was with poverty.

“What in the world do they want in this out-of-the-way place—on the road to nowhere?” thought Ralph. “If they’re not beggars, they have lost their way.”

He pushed back the hilt of his sword, and drew up one leg, covered with its high, buff-leather boot, beneath him, holding it as he waited for the party to come slowly up; and as they did, they halted where he sat, at the side of the road, and the leader, puffing and panting, took off his rusty morion with his left hand, and wiped his pink, bald head, covered with drops of perspiration, with his right, as he rolled his eyes at the lad....