The Black-Sealed Letter Or, The Misfortunes of a Canadian Cockney. 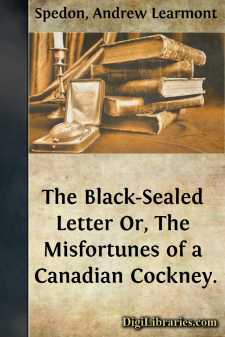 Old London!—city of cities!—whose foundations were laid when the ancient Briton in his martial glory prowled among the dense forests whose foliage darkened the waters of the Thames, long ere the foot of the adventurous Roman had touched the shores of Albion; or the Dane and Saxon had established themselves within the strongholds of the British isles. Who has not heard of this great old city, teeming with human life, and filled with the extremes of wealth, poverty, righteousness and iniquity? Who has not heard of its eminent statesmen and its distinguished authors:—its time-honored institutions of religion, literature and jurisprudence: its antiquated buildings, themselves volumes of history written the eventful finger of time:—its massive warehouses; and also its magnificent mansions, wherein peers and princes banquet in luxury:—its club-houses; and its dens of pollution, amid whose shadows the grim spectres of degraded humanity struggle out a wretched existence. Into this great city—wonderful and complicated in itself—the modern Babylon of the world,—gentle reader, now follow me in imagination, and I will introduce you to the subject of the following story.

It is the Saturday evening of a chilly night towards the end of November, 1869, that season of the year in which the grey old buildings of London assume a more sombre aspect than during the sunny days of summer. The twilight had congealed into darkness after a somewhat foggy day, and mantling its shadows around the homes of the destitute and degraded, tinging the wretched inmates with melancholy, and even making their lives more miserable and less tenacious to the world. The dark streets have been lighted up. The great tide of human beings that have during the day thronged the thoroughfares, has partially subsided; but thousands of pedestrians are still bustling to and fro; while the din of carriages are heard on every street. The provision shops are crowded with noisy customers. The coffee-houses are steaming forth their delicious viands, where throngs of both men and women are greedily satisfying their appetites: while thousands of ale-houses and gin-hells are pouring forth their poisonous liquids, where crowds of miserably degraded wretches of both sexes in human shape are swallowing down the deadly elements and rioting in hellish revelry. Alas! how many a home has been converted into a mad-house, yea, even into a very hell, by these dens of pollution, in which dwell the accursed spirit-dealers of iniquity.

Alas! how many a fond wife, with her little ones, perhaps destitute of every domestic comfort, is at that very moment anxiously awaiting the return of her husband. Hour after hour may pass away, until the very depths of night appear to grow sad with the dreary sorrow of her heart, and at length he returns—but not as a loving and sober husband; not as a tender and home-providing father; not as a man, with all the noble attributes of the human nature; not as a Christian, with the spiritual Balm of Gilead, with which to soothe the cankering ills of his household;—no, not as either he returns, but rather as a madman escaped from the prison walls of Bedlam, or as fiend let loose from the nether kennel.

But, nevertheless, there were thousands of happy households that evening enjoying the domestic comforts of a peaceful home,—that place, the dearest of all on earth, when sanctified by the affection of a united, sober, and industrious family. Such was the home and household of Mr. Charlston.

Mr. and Mrs. Charlston, their two sons and three daughters, were on that night comfortably seated in their little sitting room after tea; the mother and her daughters engaged at needlework; the father and his eldest son, George, reading the newspapers, while Frederick, the younger, was reclining upon a sofa. An infant of a year old was sleeping in a cradle; a little kitten was nestling at its feet, and purring as if trying to soothe the dreamy slumbers of its tender companion.

Mr. Charlston was about fifty-five years of age, in physical appearance tall and nervous; with sharp, prominent features, and well-defined head, denoting energy and perception. His wife was apparently about fifty years; well proportioned in form and feature, her face expressive of sensibility and affection....