The Black-Bearded Barbarian : The life of George Leslie Mackay of Formosa 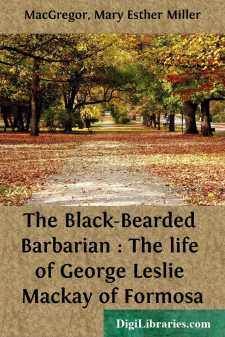 Up in the stony pasture-field behind the barn the boys had been working all the long afternoon. Nearly all, that is, for, being boys, they had managed to mix a good deal of fun with their labor. But now they were tired of both work and play, and wondered audibly, many times over, why they were not yet called home to supper.

The work really belonged to the Mackay boys, but, like Tom Sawyer, they had made it so attractive that several volunteers had come to their aid. Their father was putting up a new stone house, near the old one down there behind the orchard, and the two youngest of the family had been put at the task of breaking the largest stones in the field.

It meant only to drag some underbrush and wood from the forest skirting the farm, pile them on the stones, set fire to them, and let the heat do the rest. It had been grand sport at first, they all voted, better than playing shinny, and almost as good as going fishing. In fact it was a kind of free picnic, where one could play at Indians all day long. But as the day wore on, the picnic idea had languished, and the stone-breaking grew more and more to resemble hard work.

The warm spring sunset had begun to color the western sky; the meadow-larks had gone to bed, and the stone-breakers were tired and ravenously hungry—as hungry as only wolves or country boys can be. The visitors suggested that they ought to be going home. "Hold on, Danny, just till this one breaks," said the older Mackay boy, as he set a burning stick to a new pile of brush.

"This'll be a dandy, and it's the last, too. They're sure to call us to supper before we've time to do another."

The new fire, roaring and snapping, sending up showers of sparks and filling the air with the sweet odor of burning cedar, proved too alluring to be left. The company squatted on the ground before it, hugging their knees and watching the blue column of smoke go straight up into the colored sky. It suggested a camp-fire in war times, and each boy began to tell what great and daring deeds he intended to perform when he became a man.

Jimmy, one of the visitors, who had been most enthusiastic over the picnic side of the day's work, announced that he was going to be a sailor. He would command a fleet on the high seas, so he would, and capture pirates, and grow fabulously wealthy on prize-money. Danny, who was also a guest, declared his purpose one day to lead a band of rough riders to the Western plains, where he would kill Indians, and escape fearful deaths by the narrowest hairbreadth.

"Mebbe I'm goin'to be Premier of Canada, some day," said one youngster, poking his bare toes as near as he dared to the flames.

There were hoots of derision. This was entirely too tame to be even considered as a career.

"And what are you going to be, G. L.?" inquired the biggest boy of the smallest.

The others looked at the little fellow and laughed. George Mackay was the youngest of the group, and was a small wiry youngster with a pair of flashing eyes lighting up his thin little face....