The Biography of Robert Murray M'Cheyne

by Andrew A. Bonar 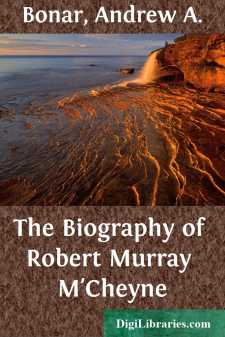 CHAPTER I. HIS YOUTH, AND PREPARATION FOR THE MINISTRY

"Many shall rejoice at his birth; for he shall be great in the sight of the Lord"—Luke 1:14.

In the midst of the restless activity of such a day as ours, it will be felt by ministers of Christ to be useful in no common degree, to trace the steps of one who but lately left us, and who, during the last years of his short life, walked calmly in almost unbroken fellowship with the FATHER and the SON.

The date of his birth was May 21, 1813. About that time, as is now evident to us who can look back on the past, the Great Head had a purpose of blessing for the Church of Scotland. Eminent men of God appeared to plead the cause of Christ. The Cross was lifted up boldly in the midst of Church Courts which had long been ashamed of the gospel of Christ. More spirituality and deeper seriousness began a few years onward to prevail among the youth of our divinity halls. In the midst of such events, whereby the Lord was secretly preparing a rich blessing for souls in all our Borders, the subject of this Memoir was born. "Many were to rejoice at his birth;" for he was one of the blessings which were beginning to be dropped down upon Scotland, though none then knew that one was born whom hundreds would look up to as their spiritual father.

The place of his birth was Edinburgh, where his parents resided. He was the youngest child of the family, and was called ROBERT MURRAY, after the name of some of his kindred.

From his infancy his sweet and affectionate temper was remarked by all who knew him. His mind was quick in its attainments; he was easily taught the common lessons of youth, and some of his peculiar endowments began early to appear. At the age of four, while recovering from some illness, he selected as his recreation the study of the Greek alphabet, and was able to name all the letters, and write them in a rude way upon a slate. A year after, he made rapid progress in the English class, and at an early period became somewhat eminent among his schoolfellows for his melodious voice and powers of recitation. There were at that time catechetical exercises held in the Tron Church, in the interval between sermons; and some friends remember the interest often excited in the hearers by his correct and sweet recitation of the Psalms and passages of Scripture. But as yet he knew not the Lord, he lived to himself, "having no hope, and without God in the world." Eph. 2:12.

In October 1821 he entered the High School, where he continued his literary studies during the usual period of six years. He maintained a high place in his classes, and in the Rector's class distinguished himself by eminence in geography and recitation. It was during the last year of his attendance at the High School that he first ventured on poetical composition, the subject being "Greece, but living Greece no more." The lines are characterized chiefly by enthusiasm for liberty and Grecian heroism, for in these days his soul had never soared to a higher region. His companions speak of him as one who had even then peculiarities that drew attention: of a light, tall form—full of elasticity and vigor—ambitious, yet noble in his dispositions, disdaining everything like meanness or deceit. Some would have been apt to regard him as exhibiting many traits of a Christian character; but his susceptible mind had not, at that time, a relish for any higher joy than the refined gaieties of society, and for such pleasures as the song and the dance could yield. He himself regarded these as days of ungodliness—days wherein he cherished a pure morality, but lived in heart a Pharisee. I have heard him say that there was a correctness and propriety in his demeanor at times of devotion, and in public worship, which some, who knew not his heart, were ready to put to the account of real feeling. And this experience of his own heart made him look with jealousy on the mere outward signs of devotion in dealing with souls. He had learnt in his own case how much a soul, unawakened to a sense of guilt, may have satisfaction in performing from the proud consciousness of integrity towards man, and a sentimental devotedness of mind that chastens the feelings without changing the heart.

He had great delight in rural scenery. Most of his summer vacations used to be spent in Dumfriesshire, and his friends in the parish of Ruthwell and its vicinity retain a vivid remembrance of his youthful days. His poetic temperament led him to visit whatever scenes were fitted to stir the soul. At all periods of his life, also, he had a love of enterprise. During the summer months he occasionally made excursions with his brother, or some intimate friend, to visit the lakes and hills of our Highlands, cherishing thereby, unawares, a fondness for travel, that was most useful to him in after days....