The Big Nightcap Letters Being the Fifth Book of the Series 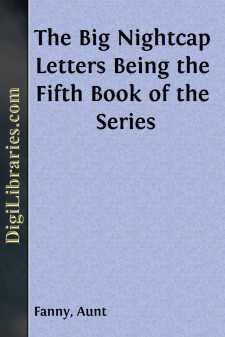 One evening, when all the children, after the usual frolic with Crocus the cat and the tremendous dog, had settled themselves for their "nightcaps," (their meaning of which word, of course, you all know,) the little mother cleared her throat, and paused, for she was feeling for a letter that was in her pocket.

"Something particularly good is coming to-night," whispered George to Anna.

"What makes you think so?"

"Don't you see how bright her eyes are? See! now she is hugging Charley, and kissing him;" and unable to resist this loving exhibition, he rushed from his seat to hug and kiss Charley, too, and ask him if he felt quite comfortable.

Charley thanked him with a loving look, and George went back to his seat, all in a glow.

"Children," said the little mother, "I received to-day a letter from Aunt Fanny! She says you have given her so many delightful stories, she thinks it is quite time to give you some in return."

"Did you ever!" exclaimed the children, eagerly. "What a perfect bird of an Aunt Fanny! How perfectly delightful!"

"She wishes me to ask how you would like her to send you each a story, that you would know had been written especially for you?"

"Oh! oh! oh! what a capital idea!" cried all the children, clapping their hands at such a rate, that an old bachelor opposite opened the window and looked out with a spy-glass, to see where the fire was; and nearly frightened a lamplighter into fits, who was just at that very moment lighting a lamp at his door.

This most delightful announcement made the children chatter so fast, that Charley became nearly sick, laughing at what they said; for George again called Aunt Fanny a "perfect bird!" and Harry improved it by exclaiming that she was a perfect cat bird! which, of course, meant something very complimentary.

"Won't she write stories like a mice!" cried Johnny.

"And won't mamma read the writing like a precious kitten!" said Clara.

"But, mamma," said Anna, "the letter looks very thick; is the first story in it?"

"Yes," said the little mother. "I will read what Aunt Fanny says—she says—

"And now, dear children, what do you think? Do you remember the story of the 'Doctor' in the first Nightcap book? Well, that very doctor is now a young lady; and she has written a story on purpose for our dear little Charley. I think it is very charming; and I have sent it for the very first one, because I well know this will best please his loving brothers and sisters. Sarah, (the real name of the 'doctor,' you know,) has tried to write what would most gratify Charley's sweet and tender nature." Here the little mother stopped, and kissed her lame boy, and the children murmured, "dear, dear Charley." Then she read on—

"You will perceive that Sarah has endeavored to imitate the beautiful German style. Here is her story. Give Charley a kiss for us both before you begin."

And in almost breathless silence the mother read the title—