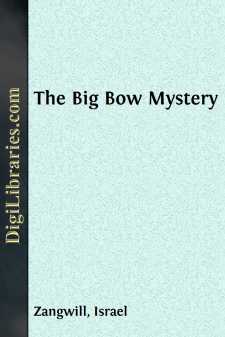 OF MURDERS AND MYSTERIES.

As this little book was written some four years ago, I feel able to review it without prejudice. A new book just hot from the brain is naturally apt to appear faulty to its begetter, but an old book has got into the proper perspective and may be praised by him without fear or favor. "The Big Bow Mystery" seems to me an excellent murder story, as murder stories go, for, while as sensational as the most of them, it contains more humor and character creation than the best. Indeed, the humor is too abundant. Mysteries should be sedate and sober. There should be a pervasive atmosphere of horror and awe such as Poe manages to create. Humor is out of tone; it would be more artistic to preserve a somber note throughout. But I was a realist in those days, and in real life mysteries occur to real persons with their individual humors, and mysterious circumstances are apt to be complicated by comic. The indispensable condition of a good mystery is that it should be able and unable to be solved by the reader, and that the writer's solution should satisfy. Many a mystery runs on breathlessly enough till the dénouement is reached, only to leave the reader with the sense of having been robbed of his breath under false pretenses. And not only must the solution be adequate, but all its data must be given in the body of the story. The author must not suddenly spring a new person or a new circumstance upon his reader at the end. Thus, if a friend were to ask me to guess who dined with him yesterday, it would be fatuous if he had in mind somebody of whom he knew I had never heard. The only person who has ever solved "The Big Bow Mystery" is myself. This is not paradox but plain fact. For long before the book was written, I said to myself one night that no mystery-monger had ever murdered a man in a room to which there was no possible access. The puzzle was scarcely propounded ere the solution flew up and the idea lay stored in my mind till, years later, during the silly season, the editor of a popular London evening paper, anxious to let the sea-serpent have a year off, asked me to provide him with a more original piece of fiction. I might have refused, but there was murder in my soul, and here was the opportunity. I went to work seriously, though the Morning Post subsequently said the skit was too labored, and I succeeded at least in exciting my readers, so many of whom sent in unsolicited testimonials in the shape of solutions during the run of the story that, when it ended, the editor asked me to say something by way of acknowledgement. Thereupon I wrote a letter to the paper, thanking the would-be solvers for their kindly attempts to help me out of the mess into which I had got the plot. I did not like to wound their feelings by saying straight out that they had failed, one and all, to hit on the real murderer, just like real police, so I tried to break the truth to them in a roundabout, mendacious fashion, as thus:

To the Editor of "The Star."

Sir: Now that "The Big Bow Mystery" is solved to the satisfaction of at least one person, will you allow that person the use of your invaluable columns to enable him to thank the hundreds of your readers who have favored him with their kind suggestions and solutions while his tale was running and they were reading?...