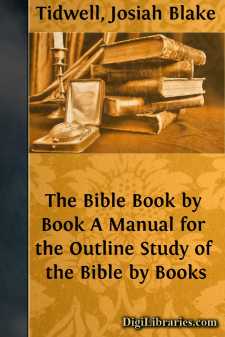 CHAPTER I.Why We Believe The Bible.

There are two lines of proof of the reliability of the scriptures, the external and the internal. These different kinds of evidences may be put down, without separation, somewhat as follows:

1. The Formation and Unity of the Bible. There are sixty-six books written by nearly forty men, who lived at various times, and yet these books agree in making a perfect whole. These writers were of different classes and occupations. They possessed different degrees of training and lived in widely different places and ages of the world. The perfect agreement of their writings could not, therefore, be the result of any collusion between them. The only conclusion that can explain such unity is that one great and infinite mind dictated the scripture.

2. The Preservation of the Bible. That the Bible is a divine book is proven in that it has survived the wreck of empires and kingdoms and the destruction of costly and carefully gathered libraries and that, too, when there was no special human effort to save it. At times all the constituted powers of earth were arrayed against it, but it has made its way against the tide of fierce opposition and persecution.

3. Its Historical Accuracy. The names of towns, cities, battles, kings, empires and great events, widely apart in time and place, are given without a blunder. The ruins of cities of Assyria, Egypt and Babylon have been unearthed and tablets found that prove the accuracy of the Bible narrative. These tablets corroborate the stories of the creation and fall of man, of the flood, the tower of Babel, the bondage in Egypt, the captivity, and many other things. This accuracy gives us confidence in the reality of the book.

4. Its Scientific Accuracy. At the time of the writing of the Bible. there were all sorts of crude and superstitious stories about the earth and all its creatures and processes. It was humanly impossible for a book to have been written that would stand the teat of scientific research, and yet at every point it has proven true to the facts of nature. Its teachings areas to the creation of all animal life is proven in science, in that not a single new species has come into existence within the history of man and his research or experiment. David said the sun traveled in a circuit (Ps. 19:6), and science has proven his statement. Job said the wind had weight (Job 28:25) and science has finally verified it. That the earth is suspended In space with no visible support is declared by Job, who said that "God hangeth the earth upon nothing", Job 26:7. Besides these and other specific teachings of science which correspond to Bible utterances, the whole general teachings of the scripture is sustained by our investigations. Many theories have been advanced that contradicted the Bible (at one time a French Institution of Science claimed that there were eighty hostile theories), but not a single such theory has stood. Wherever a teaching of science contradicting the Bible has ever been advanced, it has been proven false, while the Bible was found to correspond to the facts....