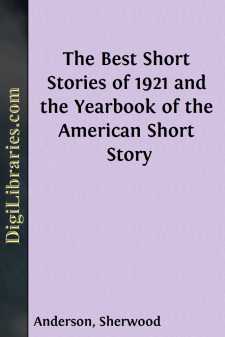 I was talking the other day to Alfred Coppard, who has steered more successfully than most English story writers away from the Scylla and Charybdis of the modern artist. He told me that he had been reading several new novels and volumes of short stories by contemporary American writers with that awakened interest in the civilization we are framing which is so noticeable among English writers during the past three years. He asked me a remarkable question, and the answer which I gave him suggested certain contrasts which seemed to me of basic importance for us all. He said: "I have been reading books by Sherwood Anderson, Waldo Frank and Ben Hecht and Konrad Bercovici and Joseph Hergesheimer, and I can see that they are important books, but I feel that the essential point to which all this newly awakened literary consciousness is tending has somehow subtly eluded me. American and English writers both use the same language, and so do Scotch and Irish writers, but I am not puzzled when I read Scotch and Irish books as I am when I read these new American books. Why is it?"

I had to think for a moment, and then the obvious answer occurred to me. I told him that I thought the reason for his moderate bewilderment was due to the fact that the Englishman or the Scotchman or the Irishman living at home was writing out of a background of racial memory and established tradition which was very much all of one piece, and that all such an artist's unspoken implications and subtleties could be easily taken for granted by his readers, and more or less thoroughly understood, because they were elements in harmony with a tolerably fixed and ordered world.

I added that this was more or less true of the American writer up to a date roughly coinciding with that of the Chicago World's Fair in 1892. During the thirty years more or less which have elapsed since that date, there has been an ever widening seething maelstrom of cross currents thrusting into more and more powerful conflict from year to year the contributory elements brought to a new potential American culture by the dynamic creative energies, physical and spiritual, of many races.

My suggestion to Mr. Coppard was that gradually the Anglo-Saxon, to take the most readily understandable instance, was beginning to absorb large tracts of many other racial fields of memory, and to share the experience of Scandinavian and Russian and German and Italian, of Polish and Irish and African and Asian members of the body politic, and that all these widening tracts of remembered racial experience interacting upon one another under the tremendous pressure of our nervous, keen, and eager industrial civilization had set up a new chaos in many creative minds. I said that Mr. Anderson and the others, half consciously and half unconsciously, were trying to create worlds out of each separate chaos, living dangerously, as Nietzsche advised, and fusing their conceptions at a certain calculated temperature in artistic crucibles of their own devising.

Mr. Coppard said that he quite saw that, but added that the particular meaning in each case more or less escaped him. And then I ventured to suggest that these meanings were more important for Americans at the present stage than for Europeans, because American minds would grasp readily at suggestions that harmonized with their own spiritual pasts, and seize instinctive relations and congruities which had previously escaped them in their experience, and so begin to formulate from these books new intuitive laws. I suggested, moreover, that from the point of view of the great artist these books were all more or less magnificent failures which were creating, little by little, out of the shock of conflict an ultimate harmony, out of which the great book for which we are all waiting in America might come ten years from now, or five years, or even tomorrow.

To this he replied that he felt I had supplied the clue which had baffled him, and asked me if I did not discover a chaos of a different sort in English life and literature since the armistice. I agreed that I did discover such a chaos, but that it seemed to me a chaos which was an end rather than a beginning, a chaos in which the Tower of Babel had fallen, and men had come to babble with more and more complete dissociation of ideas, or else, on the other hand, were clinging desperately to such literary and social traditions as had been left, while their work froze into a new Augustanism comparable to that of the early years of the eighteenth century.

Next year, in conjunction with John Cournos, I shall begin in a parallel series of volumes with the present series, to present my annual study of the English case. Meanwhile, for the present, I deal once more with that American chaos in which I have unbounded and ultimate faith....