The Best of the World's Classics, Restricted to prose. Volume III (of X) - Great Britain and Ireland I 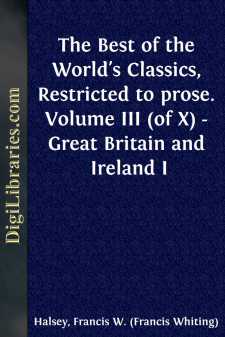 Born in 1281, died in 1345; the son of Sir Richard Aungerville, his own name being taken from his birthplace, Bury St. Edmonds; educated at Oxford, and became a Benedictine monk; tutor to Edward III; dean of Wells Cathedral in 1333; bishop of Durham the same year; high chancellor of England in 1334; founded a library at Oxford; his "Philobiblon" first printed at Cologne in 1473.

IN PRAISE OF BOOKS

The desirable treasure of wisdom and knowledge, which all men covet from the impulse of nature, infinitely surpasses all the riches of the world; in comparison with which, precious stones are vile, silver is clay, and purified gold grains of sand; in the splendor of which, the sun and moon grow dim to the sight; in the admirable sweetness of which, honey and manna are bitter to the taste. The value of wisdom decreaseth not with time; it hath an ever-flourishing virtue that cleanseth its possession from every venom. O celestial gift of divine liberality, descending from the Father of light to raise up the rational soul even to heaven; thou art the celestial alimony of intellect, of which whosoever eateth shall yet hunger, and whoso drinketh shall yet thirst; a harmony rejoicing the soul of the sorrowful, and never in any way discomposing the hearer. Thou art the moderator and the rule of morals, operating according to which none err. By thee kings reign, and lawgivers decree justly. Through thee, rusticity of nature being cast off, wits and tongues being polished, and the thorns of vice utterly eradicated, the summit of honor is reached and they become fathers of their country and companions of princes, who, without thee, might have forged their lances into spades and plowshares, or perhaps have fed swine with the prodigal son.

Where, then, most potent, most longed-for treasure, art thou concealed? and where shall the thirsty soul find thee? Undoubtedly, indeed, thou hast placed thy desirable tabernacle in books, where the Most High, the Light of light, the Book of Life, hath established thee. There then all who ask receive, all who seek find thee, to those who knock thou openest quickly. In books Cherubim expand their wings, that the soul of the student may ascend and look around from pole to pole, from the rising to the setting sun, from the north and from the south. In them the Most High, Incomprehensible God himself is contained and worshiped. In them the nature of celestial, terrestrial, and infernal beings is laid open. In them the laws by which every polity is governed are decreed, the offices of the celestial hierarchy are distinguished, and tyrannies of such demons are described as the ideas of Plato never surpassed, and the chair of Crito never sustained.

In books we find the dead as it were living: in books we foresee things to come; in books warlike affairs are methodized; the rights of peace proceed from books. All things are corrupted and decay with time. Satan never ceases to devour those whom he generates, insomuch that the glory of the world would be lost in oblivion, if God had not provided mortals with a remedy in books. Alexander, the ruler of the world; Julius the invader of the world and the city, the first who in unity of person assumed the empire in arms and arts; the faithful Fabricius, the rigid Cato, would at this day have been without a memorial if the aid of books had failed them. Towers are razed to the earth, cities overthrown, triumphal arches moldered to dust; nor can the king or pope be found, upon whom the privilege of a lasting name can be conferred more easily than by books....