The Best of the World's Classics, Restricted to prose. Volume II (of X) - Rome 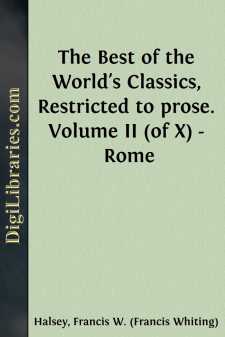 OF WORK ON A ROMAN FARM

When the owner of the farm and slaves visits his country villa, after saluting the household god, he should the same day, if possible, go round the farm; if not the same day, he should do so the day after. On seeing how the farm is being cultivated, and what work has been done or left undone, he should call for his steward and inquire for his account of what work has been done and what remains to be done. He should ask whether the work has been completed in good time and whether what is left uncompleted can be finished. He should find what wine has been made, and what wheat stored. When he has gone into these particulars, he should ask for an account of the days spent in accomplishing the work.

If the work does not seem satisfactory and the steward should excuse himself by declaring that he has done his best, that the slaves were good for nothing, that the weather was bad, that some slaves had run away, that he himself had been called off on public service, and should allege other such excuses, he should still be strictly called to account. He should be asked if on rainy or tempestuous days he had seen that indoor operations had been carried on. Had the wine-casks been scoured and lined with pitch; had the house-cleaning been done; had the grain been taken from the thrashing-floor to the granary; had manure been thrown from the stables and cow-houses and piled into heaps; had the seed been winnowed; had any rope been made; had the old rope been repaired, and had he seen that the slaves mended their coats and caps. He should be reminded that on religious festivals old ditches might have been cleared out, the public road mended, briers cut down, the garden dug over, the meadow cleared, the trees trimmed, thorns pulled up by the roots, the grain ground and a general clearing up carried through. He should also be told that when slaves were sick their rations should be cut down.

When the matters have been settled to the master's satisfaction, he should take measures to see that what has not been done be at once accomplished. He should then proceed to consider the account of the farm, and a consideration of the amount of grain which has been prepared for fodder. He should have returns made of wine and olive-oil, and learn how much has been consumed, how much sold, how much is left over and may be put on sale. If there is a deficit any year, he should order it to be made up from the outside, and whatever is above the needs of the farm sold. If there is anything to let out on contract, he should order this to be done, and concerning the work which he wishes to be thus accomplished he should give his order in writing. As regards the cattle he should order them to be sold by auction, and in the same way should sell the oil, if the price of oil has risen; likewise the superfluous wine and corn of the estate. He should also order to be sold worn-out bulls, blemished cattle, blemished sheep, wool, hides, any plow that is old, old tools, old slaves, slaves who are diseased, or anything else which is useless, for the owner of a farm must be a seller and not a purchaser.

The owner of a farm and of slaves must begin to study in early manhood the cultivation and sowing of the land....