The Best of the World's Classics, Restricted to Prose, Vol. X (of X) - America - II, Index 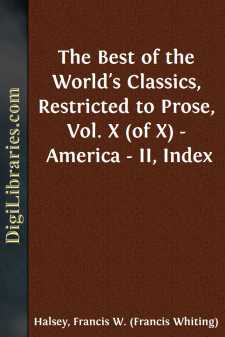 The cemetery of Père Lachaise is the Westminster Abbey of Paris. Both are the dwellings of the dead; but in one they repose in green alleys and beneath the open sky—in the other their resting place is in the shadowy aisle and beneath the dim arches of an ancient abbey. One is a temple of nature; the other a temple of art. In one the soft melancholy of the scene is rendered still more touching by the warble of birds and the shade of trees, and the grave receives the gentle visit of the sunshine and the shower: in the other no sound but the passing footfall breaks the silence of the place; the twilight steals in through high and dusky windows; and the damps of the gloomy vault lie heavy on the heart, and leave their stain upon the moldering tracery of the tomb.

Père Lachaise stands just beyond the Barrière d'Aulney, on a hillside looking toward the city. Numerous gravel walks, winding through shady avenues and between marble monuments, lead up from the principal entrance to a chapel on the summit. There is hardly a grave that has not its little enclosure planted with shrubbery, and a thick mass of foliage half conceals each funeral stone. The sighing of the wind, as the branches rise and fall upon it—the occasional note of a bird among the trees, and the shifting of light and shade upon the tombs beneath have a soothing effect upon the mind; and I doubt whether any one can enter that enclosure, where repose the dust and ashes of so many great and good men, without feeling the religion of the place steal over him, and seeing something of the dark and gloomy expression pass off from the stern countenance of Death.

It was near the close of a bright summer afternoon that I visited this celebrated spot for the first time. The first object that arrested my attention on entering was a monument in the form of a small Gothic chapel which stands near the entrance, in the avenue leading to the right hand. On the marble couch within are stretched two figures, carved in stone and drest in the antique garb of the Middle Ages. It is the tomb of Abélard and Héloïse. The history of these two unfortunate lovers is too well known to need recapitulation; but perhaps it is not so well known how often their ashes were disturbed in the slumber of the grave. Abélard died in the monastery of St. Marcel, and was buried in the vaults of the church. His body was afterward removed to the convent of the Paraclete, at the request of Héloïse, and at her death her body was deposited in the same tomb. Three centuries they reposed together; after which they were separated to different sides of the church, to calm the delicate scruples of the lady abbess of the convent. More than a century afterward they were again united in the same tomb; and when at length the Paraclete was destroyed, their moldering remains were transported to the church of Nogent-sur-Seine. They were next deposited in an ancient cloister at Paris, and now repose near the gateway of the cemetery of Père Lachaise. What a singular destiny was theirs! that, after a life of such passionate and disastrous love—such sorrows, and tears, and penitence—their very dust should not be suffered to rest quietly in the grave!—that their death should so much resemble their life in its changes and vicissitudes, its partings and its meetings, its inquietudes and its persecutions!—that mistaken zeal should follow them down to the very tomb—as if earthly passion could glimmer, like a funeral lamp, amid the damps of the charnel house, and "even in their ashes burn their wonted fires"!

As I gazed on the sculptured forms before me, and the little chapel whose Gothic roof seemed to protect their marble sleep, my busy memory swung back the dark portals of the past, and the picture of their sad and eventful lives came up before me in the gloomy distance....