The Best of the World's Classics, Restricted to Prose, Vol. VIII (of X) - Continental Europe II. 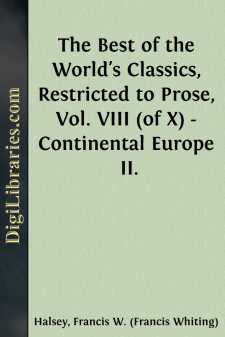 THE TYRANNY OF THE AMERICAN MAJORITY

I hold it to be an impious and execrable maxim that, politically speaking, the people has a right to do whatever it pleases; and yet I have asserted that all authority originates in the will of the majority. Am I then in contradiction with myself?

A general law, which bears the name of justice, has been made and sanctioned not only by a majority of this or that people, but by a majority of mankind. The rights of every people are consequently confined within the limits of what is just. A nation may be considered in the light of a jury which is empowered to represent society at large and to apply the great and general law of justice. Ought such a jury, which represents society, to have more power than the society in which the law it applies originates?

When I refuse to obey an unjust law, I do not contest the right which the majority has of commanding, but I simply appeal from the sovereignty of the people to the sovereignty of mankind. It has been asserted that a people can never entirely outstep the boundaries of justice and of reason in those affairs which are more peculiarly its own; and that consequently, full power may fearlessly be given to the majority by which it is represented. But this language is that of a slave.

A majority, taken collectively, may be regarded as a being whose opinions, and most frequently whose interests are opposed to those of another being, which is styled a minority. If it be admitted that a man possessing absolute power may misuse that power by wronging his adversaries, why should a majority not be liable to the same reproach? Men are not apt to change their characters by agglomerating; nor does their patience in the presence of obstacles increase with the consciousness of their strength. And for these reasons I can never willingly invest any number of my fellow creatures with that unlimited authority which I should refuse to any one of them.

I do not think that it is possible to combine several principles in the same government so as at the same time to maintain freedom and really to oppose them to one another. The form of government which is usually termed mixt has always appeared to me to be a mere chimera. Accurately speaking, there is no such thing as a mixt government, with the meaning usually given to that word; because in all communities some one principle of action may be discovered which preponderates over the others. England in the last century—which has been more especially cited as an example of this form of government—was in point of fact an essentially aristocratic state, altho it comprized very powerful elements of democracy; for the laws and customs of the country were such that the aristocracy could not but preponderate in the end, and subject the direction of public affairs to its own will. The error arose from too much attention being paid to the actual struggle that was going on between the nobles and the people, without considering the probable issue of the contest, which was really the important point....