The Best of the World's Classics, Restricted to Prose, Vol. VI (of X)-Great Britain and Ireland IV 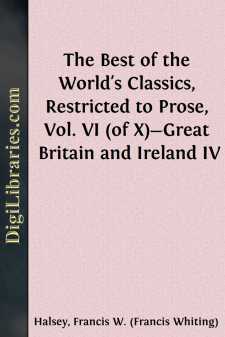 THE BEGINNINGS OF TRACTARIANISM

During the first years of my residence at Oriel, tho proud of my college, I was not quite at home there. I was very much alone, and I used often to take my daily walk by myself. I recollect once meeting Dr. Copleston, then Provost, with one of the Fellows. He turned round, and with the kind courteousness which sat so well on him, made me a bow and said, Nunquam minus solus, quam cum solus. At that time, indeed (from 1823), I had the intimacy of my dear and true friend Dr. Pusey, and could not fail to admire and revere a soul so devoted to the cause of religion, so full of good works, so faithful in his affections; but he left residence when I was getting to know him well. As to Dr. Whately himself, he was too much my superior to allow of my being at my ease with him; and to no one in Oxford at this time did I open my heart fully and familiarly. But things changed in 1826. At that time I became one of the tutors of my college, and this gave me position; besides, I had written one or two essays which had been well received. I began to be known. I preached my first University sermon. Next year I was one of the public examiners for the B. A. degree. In 1828 I became vicar of St. Mary's. It was to me like the feeling of spring weather after winter; and, if I may so speak, I came out of my shell. I remained out of it until 1841.

The two persons who knew me best at that time are still alive, beneficed clergymen, no longer my friends. They could tell better than any one else what I was in those days. From this time my tongue was, as it were, loosened, and I spoke spontaneously and without effort. One of the two, a shrewd man, said of me, I have been told, "Here is a Fellow who, when he is silent, will never begin to speak, and when he once begins to speak will never stop." It was at this time that I began to have influence, which steadily increased for a course of years. I gained upon my pupils, and was in particular intimate and affectionate with two of our Probationer Fellows, Robert Isaac Wilberforce (afterward Archdeacon), and Richard Hurrell Froude. Whately then, an acute man, perhaps saw around me the signs of an incipient party of which I was not conscious myself. And thus we discern the first elements of that movement afterward called Tractarian. The true and primary author of it, however, as is usual with great motive powers, was out of sight. Having carried off, as a mere boy, the highest honors of the University, he had turned from the admiration which haunted his steps, and sought for a better and holier satisfaction in pastoral work in the country.

Need I say that I am speaking of John Keble? The first time that I was in a room with him was on the occasion of my election to a Fellowship at Oriel, when I was sent for into the Tower, to shake hands with the Provost and Fellows. How is that hour fixt in my memory after the changes of forty-two years; forty-two this very day on which I write! I have lately had a letter in my hands which I sent at the time to my great friend, John William Bowden, with whom I passed almost exclusively my undergraduate years....