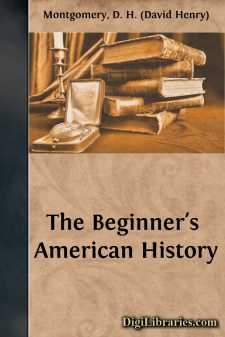 1. Birth and boyhood of Columbus.—Christopher Columbus,[2] the discoverer of America, was born at Genoa,[3] a seaport of Italy, more than four hundred and fifty years ago. His father was a wool-comber.[4] Christopher did not care to learn that trade, but wanted to become a sailor. Seeing the boy's strong liking for the sea, his father sent him to a school where he could learn geography, map-drawing, and whatever else might help him to become some day commander of a vessel.

1 These enclosed dates under a name show, except when otherwise stated, the year of birth and death.

4 Wool-comber: before wool can be spun into thread and woven into cloth the tangled locks must be combed out straight and smooth; once this was all done by hand.

2. Columbus becomes a sailor.—When he was fourteen Columbus went to sea. In those days the Mediterranean[5] Sea swarmed with war-ships and pirates. Every sailor, no matter if he was but a boy, had to stand ready to fight his way from port to port.

In this exciting life, full of adventure and of danger, Columbus grew to manhood. The rough experiences he then had did much toward making him the brave, determined captain and explorer[6] that he afterwards became.

6 Explorer: one who explores or discovers new countries.

3. Columbus has a sea-fight; he goes to Lisbon.—According to some accounts, Columbus once had a desperate battle with a vessel off the coast of Portugal. The fight lasted, it is said, all day. At length both vessels were found to be on fire. Columbus jumped from his blazing ship into the sea, and catching hold of a floating oar, managed, with its help, to swim to the shore, about six miles away.

He then went to the port of Lisbon.[7] There he married the daughter of a famous sea-captain. For a long time after his marriage Columbus earned his living partly by drawing maps, which he sold to commanders of vessels visiting Lisbon, and partly by making voyages to Africa, Iceland, and other countries.

The light parts of this map show how much of the world was then well-known; the white crosses show those countries of Eastern Asia of which something was known.

4. What men then knew about the world.—The maps which Columbus made and sold were very different from those we now have. At that time not half of the world had been discovered.[8] Europe, Asia, and a small part of Africa were the chief countries known. The maps of Columbus may have shown the earth shaped like a ball, but he supposed it to be much smaller than it really is. No one then had sailed round the globe. No one then knew what lands lay west of the broad Atlantic; for this reason we should look in vain, on one of the maps drawn by Columbus, for the great continents of North and South America or for Australia or the Pacific Ocean....