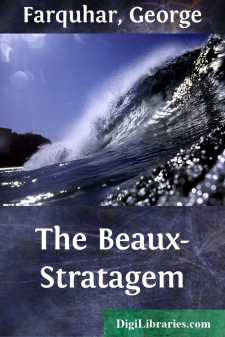 The Author. 'It is surprising,' says Mr. Percy Fitzgerald, 'how much English Comedy owes to Irishmen.' Nearly fifty years ago Calcraft enumerated eighty-seven Irish dramatists in a by no means exhaustive list, including Congreve, Southerne, Steele, Kelly, Macklin, and Farquhar—the really Irish representative amongst the dramatists of the Restoration, the true prototype of Goldsmith and Sheridan. Thoroughly Irish by birth and education, Captain George Farquhar (1677-1707) had delighted the town with a succession of bright, rattling comedies—Love and a Bottle (1698), The Constant Couple (1699), Sir Harry Wildair (1701), The Inconstant (1702), The Twin Rivals (1702), The Recruiting Officer (1706). In an unlucky moment, when hard pressed by his debts, he sold out of the army on the strength of a promise by the Duke of Ormond to gain him some preferment, which never came. In his misery and poverty, with a wife and two helpless girls to support, Farquhar was not forsaken by his one true friend, Robert Wilks. Seeking out the dramatist in his wretched garret in St Martin's Lane, the actor advised him no longer to trust to great men's promises, but to look only to his pen for support, and urged him to write another play. 'Write!' said Farquhar, starting from his chair; 'is it possible that a man can write with common-sense who is heartless and has not a shilling in his pockets?' 'Come, come, George,' said Wilks, 'banish melancholy, draw up your drama, and bring your sketch with you to-morrow, for I expect you to dine with me. But as an empty purse may cramp your genius, I desire you to accept my mite; here is twenty guineas.' Farquhar set to work, and brought the plot of his play to Wilks the next day; the later approved the design, and urged him to proceed without delay. Mostly written in bed, the whole was begun, finished, and acted within six weeks. The author designed to dedicate it to Lord Cadogan, but his lordship, for reasons unknown, declined the honour; he gave the dramatist a handsome present, however. Thus was The Beaux-Stratagem written. Farquhar is said to have felt the approaches of death ere he finished the second act. On the night of the first performance Wilks came to tell him of his great success, but mentioned that Mrs. Oldfield wished that he could have thought of some more legitimate divorce in order to secure the honour of Mrs. Sullen. 'Oh,' said Farquhar, 'I will, if she pleases, solve that immediately, by getting a real divorce; marrying her myself, and giving her my bond that she shall be a widow in less than a fortnight' Subsequent events practically fulfilled this prediction, for Farquhar died during the run of the play: on the day of his extra benefit, Tuesday, 29th April 1707, the plaudits of the audience resounding in his ears, the destitute, broken-hearted dramatist passed to that bourne where stratagems avail not any longer.

Criticism of The Beaux-Stratagem. Each play that Farquhar produced was an improvement on its predecessors, and all critics have been unanimous in pronouncing The Beaux-Stratagem his best, both in the study and on the stage, of which it retained possession much the longest....