The Beautiful Necessity Seven Essays on Theosophy and Architecture 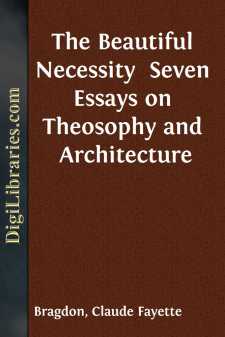 I THE ART OF ARCHITECTURE

One of the advantages of a thorough assimilation of what may be called the theosophic idea is that it can be applied with advantage to every department of knowledge and of human activity: like the key to a cryptogram it renders clear and simple that which before seemed intricate and obscure. Let us apply this key to the subject of art, and to the art of architecture in particular, and see if by so doing we may not learn more of art than we knew before, and more of theosophy too.

The theosophic idea is that everything is an expression of the Self—or whatever other name one may choose to give to that immanent unknown reality which forever hides behind all phenomenal life—but because, immersed as we are in materiality, our chief avenue of knowledge is sense perception, a more exact expression of the theosophic idea would be: Everything is the expression of the Self in terms of sense. Art, accordingly, is the expression of the Self in terms of sense. Now though the Self is one, sense is not one, but manifold: and therefore there are arts, each addressed to some particular faculty or group of faculties, and each expressing some particular quality or group of qualities of the Self. The white light of Truth is thus broken up into a rainbow-tinted spectrum of Beauty, in which the various arts are colors, each distinct, yet merging one into another—poetry into music; painting into decoration; decoration becoming sculpture; sculpture—architecture, and so on.

In such a spectrum of the arts each one occupies a definite place, and all together form a series of which music and architecture are the two extremes. That such is their relative position may be demonstrated in various ways. The theosophic explanation involving the familiar idea of the "pairs of opposites" would be something as follows. According to the Hindu-Aryan theory, Brahma, that the world might be born, fell asunder into man and wife—became in other words name and form[A] The two universal aspects of name and form are what philosophers call the two "modes of consciousness," one of time, and the other of space. These are the two gates through which ideas enter phenomenal life; the two boxes, as it were, that contain all the toys with which we play. Everything, were we only keen enough to perceive it, bears the mark of one or the other of them, and may be classified accordingly. In such a classification music is seen to be allied to time, and architecture to space, because music is successive in its mode of manifestation, and in time alone everything would occur successively, one thing following another; while architecture, on the other hand, impresses itself upon the beholder all at once, and in space alone all things would exist simultaneously. Music, which is in time alone, without any relation to space; and architecture, which is in space alone, without any relation to time, are thus seen to stand at opposite ends of the art spectrum, and to be, in a sense, the only "pure" arts, because in all the others the elements of both time and space enter in varying proportion, either actually or by implication....