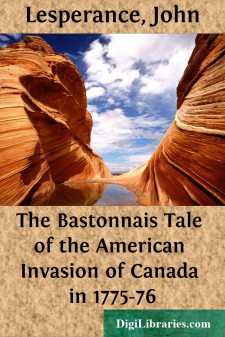 He stood leaning heavily on his carbine. High on his lonely perch, he slowly promenaded his eye over the dusk landscape spread out before him. It was the hour of midnight and a faint star-light barely outlined the salient features of the scenery. Behind him wound the valley of the St. Charles black with the shadows of pine and tamarac. Before him rose the crags of Levis, and beyond were the level stretches of the Beauce. To his left the waterfall of Montmorenci boomed and glistened. To his right lay silent and deserted the Plains of Abraham, over which a vapor of sanguine glory seemed to hover. Directly under him slept the ancient city of Champlain. A few lights were visible in the Chateau of St Louis where the Civil Governor resided, and in the guard-rooms of the Jesuit barracks on Cathedral-square, but the rest of the capital was wrapped in the solitude of gloom. Not a sound was heard in the narrow streets and tortuous defiles of Lower Town. A solitary lamp swung from the bows of the war-sloop in the river.

He stood leaning heavily on his carbine. To have judged merely from his attitude, one would have said that he was doing soldier's duty with only a mechanical vigilance. But such was not the case. Never was sentry set upon watch of heavier responsibility, and never was watch kept with keener observation. Eye, ear, brain—the whole being was absorbed in duty. Not a sight escaped him—from the changes of cloud in the lowering sky over the offing, to the deepening of shadows in the alley of Wolfe's Cove. Not a sound passed unheard—from the fluttering wing of the sparrow that had built its winter nest in the guns of the battery, to the swift dash of the chipmunk over the brown glacis of the fortifications. Standing there on the loftiest point of the loftiest citadel in America, his martial form detached from its bleak surroundings, and clearly defined, like a block of sculptured marble, against the dark horizon—silent, alone and watchful—he was the representative and custodian of British power in Canada in the hour of a dread crisis. He felt the position and bore himself accordingly.

Roderick Hardinge was a high-spirited young fellow. He belonged to the handful of militia which guarded the city of Quebec, and he resented the imputations which had been continually cast, during the preceding two months, on the efficiency of that body. He knew that the Americans had carried everything before them in the upper part of the Colony. Schuyler had occupied Isle-aux-Noix without striking a blow. Five hundred regulars and one hundred volunteers had surrendered at St. Johns. Bedell, of New Hampshire, had captured Chambly, with immense stores of provisions and war material. Montgomery was marching with his whole army against Montreal. The garrison of that city was too feeble to sustain an attack and must yield to the enemy. Then would come the turn of Quebec. Indeed, it was well known that Quebec was the objective point of the American expedition. As the fall of Quebec had secured the conquest of New France by the British in 1759, so the capture of Quebec was expected to secure the conquest of Canada by the Americans in the winter of 1775-76. This was perfectly understood by the Continental Congress at Philadelphia. The plan of campaign was traced out with this view for General Schuyler, and when that officer resigned the command, owing to illness, after his success at St. Johns, Montgomery took up the same idea and determined to carry it out. From Montreal he addressed a letter to Congress in which he said pithily: "till Quebec is taken, Canada is unconquered."

Roderick Hardinge was painfully aware that the authorities of Quebec had little or no confidence in the ability of the militia for the purposes of defence. It was necessary in the interest of that body, as well as in the interest of the city, that this prejudice should be exploded. Hardinge undertook to do it. No time was to be lost. In a fortnight Quebec might be invested. He set to work with the assistance of only one tried companion....